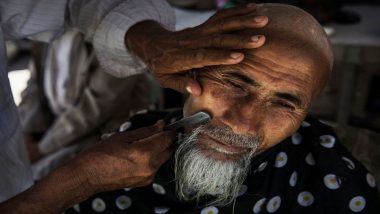 Paris, July 28: Days after the United States sanctioned senior officials of Chinese Communist Party (CPC), ally France has called for a United Nations-led observer mission to evaluate the treatment of Uyghurs by China. In a statement issued by the French Foreign Ministry on Tuesday, it called upon the UN to lead a mission to Xinjiang province of China.

Uyghurs, an ethnic Muslim group forming the majority population in China's western Xinjiang province, are allegedly subjected to gross human rights' violation. An American Intelligence report confirmed the presence of "concentration camps" where around 1 million Uyghurs are being detained. US Imposes Sanctions and Visa Restrictions on 3 Chinese Officials for Human Rights Violations in Xinjiang Province.

China has so far dismissed the accusations of committing rights' violations. In its successive statements, the Foreign Ministry in Beijing claimed that the local population of Xinjiang are admitted to "re-education camps" to curb the traits of extremism.

Uyghurs activists, exiled in other parts of the world, accuse China of forcing the detained Muslims in Xinjiang to work as "bonded labourers". Their children are being coerced into giving up Islam and embracing atheism, said Uyghur rights' activist Arsalan Hidayat, currently based in Istanbul.

Independent journalist CJ Werleman, based on the inputs received from exiled Uyghurs, has accused China of running a "live organ harvesting racket". The detained Muslims of Xinjiang are "slaughtered" based on the order for organ transplantation, he alleged.

French Foreign Affairs Minister Jean-Yves le Drian told the Parliament last week that "France is closely following all the testimonies relayed by the press and through human rights organisations."

"According to information that we read or have, there are imprisonment camps for Uighurs, mass detentions, disappearances, forced labour, forced sterilisations, the destruction of Uighur heritage," Le Drian added.

(The above story first appeared on LatestLY on Jul 28, 2020 10:18 PM IST. For more news and updates on politics, world, sports, entertainment and lifestyle, log on to our website latestly.com).