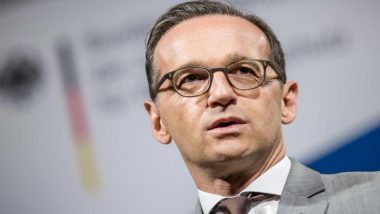 Berlin, Sep 24: German Foreign Minister Heiko Maas has gone into quarantine after one of his bodyguards tested positive for the novel coronavirus, the government announced.

In cooperation with public health services, the Ministry would now clarify whether and to what extent other people were affected and what measures, if any, were to be taken.

"All persons potentially affected will be contacted promptly," the spokesperson added.

Meanwhile, Economy Minister Peter Altmeier has also gone into "precautionary" quarantineafter learning that an employee of a colleague who had attended a meeting last week in Berlin had tested positive, according to a Deutsche Welle news report.

In March, German Chancellor Angela Merkel had self-quarantined after a doctor who vaccinated was infected. Merkel then took three tests and the results were all negative.

(The above story first appeared on LatestLY on Sep 24, 2020 11:11 AM IST. For more news and updates on politics, world, sports, entertainment and lifestyle, log on to our website latestly.com).