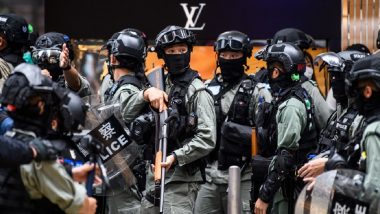 Hong Kong, June 4: A controversial legislation making disrespect to China's national anthem a penal offence was passed in the Hong Kong Legislative Council on Thursday. The controversial Bill was cleared by the Legislature on a day when thousands in the city are expected to defy COVID-19 social distancing norms and gather to commemorate the 31st anniversary of Tiananmen Square massacre. Donald Trump Threatens to End Preferential Treatment For Hong Kong in Trade And Travel Over China's New Security Law.

The Bill, tabled by the pro-establishment ruling regime, was passed with the vote of 41 lawmakers. Only one member of the Opposition camp voted against the proposed law. Nearly all the Democratic legislators had stormed out of the Council before the legislation was tabled to vote, as the amendments suggested by them were vetoed.

Ahead of the Bill passage, unruly scenes emerged from the Legislature as two Democratic threw a foul-smelling liquid in the Council to mark their dissent against the legislation. The lawmakers - Eddie Chu and Ray Chan - belonged to the Democratic Party. They were removed from the Council by the guards after they threw the liquid in front area of the chamber.

The law, which sailed through the Legislature, proposed a jail term of three years for those convicted of "disrespecting" the Chinese national anthem. The convicts would also be levied a fine of HK$50,000 (US$6,450), the law proposes. It further adds that the anthem should be played on all suitable occasions to instill respect towards the country.

The contentious Bill is expected to draw further outrage as the pro-China government of Hong Kong chose to pass it on the day marking 31 years of the carnage at Tiananmen Square in Beijing. On this day - June 4 - in 1989, the Chinese Communist regime initiated a brutal crackdown on the pro-democracy protesters, leading to the death of over 10,000 unarmed demonstrators.

(The above story first appeared on LatestLY on Jun 04, 2020 04:51 PM IST. For more news and updates on politics, world, sports, entertainment and lifestyle, log on to our website latestly.com).