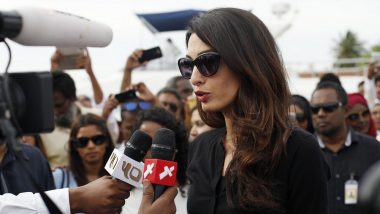 Wa Lone, 31, and Kyaw Soe Oo, 28, had been working on a Reuters investigation into the killing of 10 Rohingya Muslim men in western Myanmar’s Rakhine state during an army crackdown that began in August, which has sent nearly 700,000 people fleeing to Bangladesh.

A court in Yangon has been holding preliminary hearings since January to decide whether the two journalists will be charged under the colonial-era Officials Secrets Act, which carries a maximum penalty of 14 years in prison. The journalists have been accused by the Myanmar government of possessing secret government papers.

“Wa Lone and Kyaw Soe Oo are being prosecuted simply because they reported the news. I have reviewed the case file and it is clear beyond doubt that the two journalists are innocent and should be released immediately,” Amal Clooney was quoted as saying in a statement released by her office.

“The outcome of this case will tell us a lot about Myanmar’s commitment to the rule of law and freedom of speech,” said Clooney, who has gained international prominence as a human rights lawyer while working on cases like highlighting the plight of Yezidi women at the hands of Islamic State militants in Iraq.

Gail Gove, chief counsel of Reuters, said retaining Clooney would strengthen the company's international legal expertise and broaden efforts to secure the release of the reporters. The arrest has been termed by the human rights community as an effort to silence the press, especially its coverage of the situation in Rakhine state of Myanmar where the military is accused of massive human rights abuses against the Muslim Rohingya minority population.

UN Secretary-General Antonio Guterres has called for the release of journalists, who have been in prison in Yangon since their arrest on December 12 last year. The U.N. has called the military violence against the Rohingya population as ethnic cleansing.

Amal Clooney’s presence, who is married to Hollywood actor George Clooney, on Reuters’ defense team will bring her international experience to the counsel and shine a spotlight on the case that has widely been decried as an attack on free press. Clooney, who worked at the Hague before joining the London bar is of Lebanese-British descent and has defended Azerbaijani investigative journalist Khadija Ismayilova against politically motivated prosecution as well as Julian Assange, the founder of WikiLeaks, in his fight against extradition to Sweden.

(The above story first appeared on LatestLY on Mar 31, 2018 09:51 AM IST. For more news and updates on politics, world, sports, entertainment and lifestyle, log on to our website latestly.com).