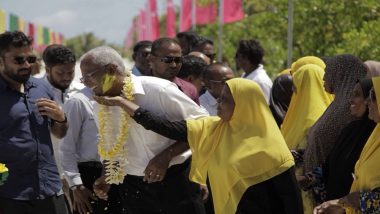 Maldives’ Opposition leader has claimed victory in the presidential election, based on results tabulated from 90 per cent of the ballot boxes. Ibrahim Mohamed Solih holds an unbeatable lead over Abdulla Yameen, with 437 of 472 ballot boxes counted, media in the Indian Ocean islands say.

But the national electoral commission has not yet announced any results.

"We have won this election with a comfortable majority, I called on President Abdulla Yameen to respect the will of the people and to immediately begin the smooth transition of power," Al Jazeera quoted Solih, as saying.

Our quick count results indicate that Ibrahim Mohamed Solih has won the 2018 Presidential Election by a decisive margin. We call on all stakeholders to maintain an environment conducive for a peaceful transfer of power. #MVElection2018 pic.twitter.com/cfTRDALpNl

Around 263,000 Maldivian voters exercised their rights in the high-stakes elections, which has been keenly watched by countries such as India, the United States and China. The European Union and US voiced concerns about the election, with both threatening to impose targeted sanctions if the democratic situation did not improve.

Incumbent President Abdulla Yameen of the Progressive Party of Maldives (PPM) is eyeing a second five-year term, while senior lawmaker Ibrahim Mohamed Solih, who was nominated by a coalition of opposition parties, led by the Maldivian Democratic Party (MDP), was looking to dethrone the former in an effort to restore democracy in the island nation.

Unlike previous elections, only two candidates were running for the post of the President this time around. Apart from the Maldives, voters were entitled to exercise their franchise in India, Sri Lanka, the United Kingdom and Malaysia, with as many as 472 ballot boxes being placed across the five countries.

Solih said his win was "a moment of happiness, a moment of hope" and urged a peaceful transition of power for the Indian Ocean archipelago.

President Yameen's government stands accused of crushing dissent by human rights organisations such as Amnesty International. Police raided opposition headquarters on the eve of the vote.

A political upheaval has surrounded the island nation in the past few months, with Yameen imposing a state of emergency to annul a Maldivian Supreme Court ruling that quashed the conviction of nine opposition leaders, including Mohamed Nasheed, Maldives' first democratically-elected president.

(The above story first appeared on LatestLY on Sep 24, 2018 05:30 AM IST. For more news and updates on politics, world, sports, entertainment and lifestyle, log on to our website latestly.com).