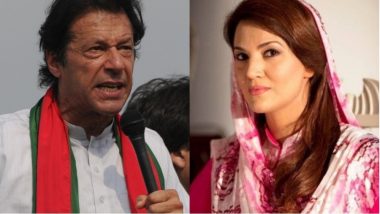 Islamabad, August 5: Imran Khan’s former wife Reham Khan on Wednesday took a dig at the Pakistani PM over new political map approved by country’s government incorporating Indian territories. In a sarcastic comment Reham Khan said that why they only stopped at Kashmir, Reham Khan remarked that she wanted Delhi also.

Imran Khan’s former wife in a tweet said, “Why did they stop at only Kashmir? I want Delhi too,” She also shared the political map approved by the Pakistan cabinet on Tuesday. The political map approved by the Imran Khan government has included Indian territories of Jammu and Kashmir, Ladakh and some parts of Gujarat. Pakistan Includes Indian Territories in New Political Map, India Calls It an Exercise in 'Political Absurdity'

Why did they stop at only Kashmir? I want Delhi too ☹️ https://t.co/sG8iK6nZtG

The regions of Gujarat which are included in the map by Pakistan are- Junagadh and Manavadar. The map approved by the Pakistan cabinet also includes Sir Creek. Pakistan has also claimed sovereignty over Siachen by extending the Line of Control (LoC) to the Karakoram Pass.

The Pakistan government approved the nee political map a day before the first anniversary of the Abrogation of Article 370 by India in Jammu and Kashmir. After unveiling the map, the Pakistan PM said that it represented the ambition of the people of Pakistan.

Reacting to the development, India on Tuesday, India called it an exercise in political absurdity. "We've seen a so-called 'political map' of Pakistan that has been released by PM Imran Khan. This is an exercise in political absurdity, laying untenable claims to territories in the Indian state of Gujarat and our union territories of Jammu Kashmir and of Ladakh," the Ministry of External Affairs said.

(The above story first appeared on LatestLY on Aug 05, 2020 08:17 PM IST. For more news and updates on politics, world, sports, entertainment and lifestyle, log on to our website latestly.com).