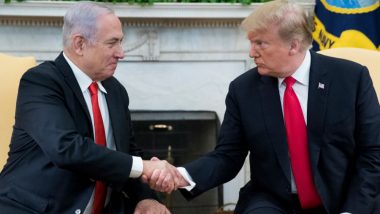 Washington, August 13: The United Arab Emirates (UAE) and Israel signed a landmark deal on Thursday to end years of strife in their ties over the issue of Palestine occupation. United States President Donald Trump made the agreement public, calling it a "huge breakthrough" towards establishing normalcy and peace in the Middle East.

"HUGE breakthrough today! Historic Peace Agreement between our two GREAT friends, Israel and the United Arab Emirates! (sic)," Trump tweeted. The deal, according to White House officials, was brokered by the US President who actively engaged with the leadership of both the nations. OIC Headed for Split as Pakistan, Turkey Raise Kashmir and Palestine.

Joint Statement of the United States, the State of Israel, and the United Arab Emirates pic.twitter.com/oVyjLxf0jd

As per the agreement, UAE and Israel will replace their current system of third-party-based negotiations with "full bilateral ties". Delegations of both the countries will meet in the upcoming months to sign deals for joint development in energy, trade, security, telecommunication, healthcare and environment sectors.

The pact between Abu Dhabi and Tel Aviv, considered as "historic" by analysts, comes amid a deepening crack within the Organisation of Islamic Cooperation (OIC) group of nations. Pakistan, backed by Turkey and Malaysia, has accused the Saudi Arabia-led amalgam of betraying the cause of Kashmir and Palestine.

Both Saudi and UAE share smooth bilateral ties with Indian Prime Minister Narendra Modi, and are also in favour of normalising relations with Israel -- which has been at loggerheads with most Arab countries in the past six decades.

The UAE-Israel deal is also expected to drift the dissenting group of OIC countries towards Iran. In a couple of statements issued earlier this year, Tehran and its affiliated militant group Hezbollah had accused the Arab nations of "betraying" the cause of Palestine, whose sovereignty was eroded after the second world war.

(The above story first appeared on LatestLY on Aug 13, 2020 08:53 PM IST. For more news and updates on politics, world, sports, entertainment and lifestyle, log on to our website latestly.com).