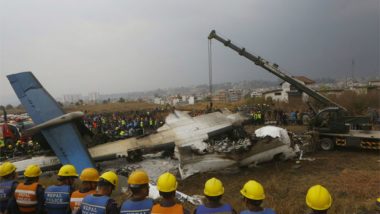 EAM @SushmaSwaraj spoke to #BangladeshForeignMinister & expressed deepest condolences & sympathies for the loss of lives in the crash of #USBangla Airlines in #Kathmandu today. EAM offered any assistance required in Kathmandu, and shared thoughts and prayers for those injured.

The US-Bangla Airlines aircraft crashed and burst into flames while landing at Nepal's Tribhuvan International Airport (TIA) at Kathmandu on Monday claiming 49 lives, a release from Civil Aviation Authority Nepal stated. The plane, which was en route to Kathmandu from Dhaka, had 33 Nepali, 32 Bangladeshi, one Chinese and one Maldivian passenger on board. The plane, which evaded the runway, came down tearing the fence dived on the ground and burst into flames dowsing around 500 meters away from the runway, an airport official told ANI seeking anonymity.

"When we arrived here the plane had already crashed and was burning. The rescuers had already started the rescue and search operation," said Nabin Gupta, Health Assistant of a private hospital in Kathmandu stationed at TIA. Nepal's Prime Minister KP Sharma Oli and other politicos rushed to the spot and conveyed their condolence. The reason behind the crash of the 17-year old aircraft is yet to be established, but the rescuers and other aviation staffs have recovered the black box of the aircraft.