More than 11 million people have fled Ukraine since Russia began its war against Kiev on February 24, according to the latest UN figures. 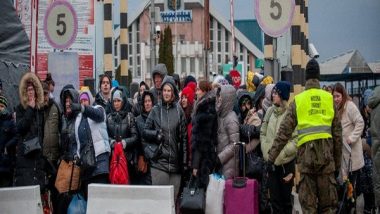 Kiev, April 23: More than 11 million people have fled Ukraine since Russia began its war against Kiev on February 24, according to the latest UN figures.

The world body further revealed that while 5.1 million people left for neighbouring countries, another 6.48 million were believed to have been displaced inside the war-torn nation, reports the BBC.

Meanwhile, a survey conducted by the UN's International Organization for Migration (IOM) between March 9-16 revealed that 13.5 per cent of the newly displaced people had already had prior experience with displacement during 2014-2015. Many of those displaced are particularly vulnerable, pregnant and breastfeeding women, elderly persons, those with disabilities, chronic illnesses and people directly affected by violence.

According to the survey, more than 53 per cent of internally displaced people are women and the most pressing needs include medicines, health services and financial resources. The European Union (EU) has granted Ukrainian refugees a blanket right to stay and work throughout its 27 member nations for up to three years, the BBC reported. Somalia Famine: UN Partners Takes Different Approach To Prevent Crisis in Country, Focusing On Collaboration With Local Authorities, Says UN Humanitarians.

They will also receive social welfare and access to housing, medical treatment and schools. The UK has also launched a family visa scheme for Ukrainians, as well as the Homes for Ukraine initiative, under which people in Britain can nominate an individual or family to stay with them rent-free for at least six months.

(The above story first appeared on LatestLY on Apr 23, 2022 09:20 AM IST. For more news and updates on politics, world, sports, entertainment and lifestyle, log on to our website latestly.com).