Peace Mission 2021: India To Carry Out Military Drill With China and Pakistan in Russia

As part of the SCO initiative, the Peace Mission Exercise is conducted for member states. Peace Mission-2021 is an anti-terrorist command and staff exercise of member countries. More than 3,000 soldiers are expected to participate in the drill. 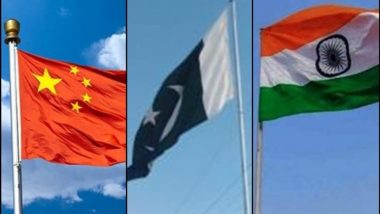 New Delhi, August 6: As India makes efforts to thwart threats at its borders from China and Pakistan, troops from the three countries are set to take part in a mega anti-terror drill of the Shanghai Cooperation Organisation (SCO) in Russia aimed at expanding cooperation to deal with the growing menace of terrorism and extremism.

As part of the SCO initiative, the Peace Mission Exercise is conducted for member states. Peace Mission-2021 is an anti-terrorist command and staff exercise of member countries. More than 3,000 soldiers are expected to participate in the drill.

The Indian Army will be conducting air reconnaissance and protecting facilities during the joint drills with the Chinese People's Liberation Army and the Pakistan Army. China to Hold 5-Day Military Exercise in South China Sea.

The joint exercise will be conducted by the Central Military Commission of Russia from September 11 to September 25 at the Donguzsky training ground in the Orenburg region in Urals.

The drill will involve tactical-level operations in an international counter-insurgency or counter-terrorism environment under the SCO Charter. The joint exercise will strengthen mutual confidence, interoperability and enable sharing of best practices among the armed forces of the SCO nations.

India became a full member of the SCO in June 2017. The SCO was established in Shanghai in 2001, with China, Russia, Kazakhstan, Kyrgyzstan, Tajikistan and Uzbekistan as its founding members. Sources said the Indian contingent will have 200 personnel, primarily comprising troops from the infantry, Indian Air Force and Indian Navy.

Last year, India had withdrawn from a multilateral war game as its troops were engaged in a bitter standoff with the Chinese PLA in several areas along the Line of Actual Control in Eastern Ladakh, while Pakistan was in continuous violation of the ceasefire agreement.

At first, India had agreed but later it withdrew from the multi-lateral exercise last year. No reason was cited officially as to why India had reversed its decision.

(The above story first appeared on LatestLY on Aug 06, 2021 11:13 PM IST. For more news and updates on politics, world, sports, entertainment and lifestyle, log on to our website latestly.com).