"Western European countries, the US, Canada, Australia are actually waging a war against us in trade and the economy," Peskov was quoted by TASS in an interview with PBS. 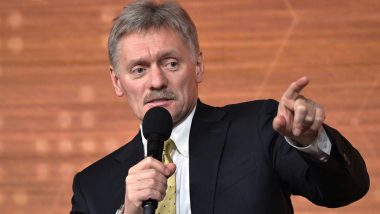 Moscow, March 29: Russia does not intend to engage in charity and export gas to Europe for free, Kremlin spokesperson Dmitry Peskov said while commenting on statements by representatives of Western countries that they will not pay for deliveries in rubles.

Peskov also stressed that Moscow was not the initiator of such a development of the situation, since it was the Western states that unleashe

Western countries unleashed an economic war against Russia, he added.

"Western European countries, the US, Canada, Australia are actually waging a war against us in trade and the economy," Peskov was quoted by TASS in an interview with PBS.

According to him, Western countries seized Russian property, seize money, block financial relations. He noted that Russia has to adapt to the new reality.

Russia does not intend to supply Europe with gas for free, Peskov said on the air of the American television company PBS. "No payment - no gas," TASS quoted Peskov as saying.

According to him, he does not know what will happen if the EU refuses to pay for gas in rubles.

"However, we definitely do not intend to engage in charity in this regard - to send gas to Western Europe for free."

He noted that Russia will study options for action as soon as they learn about the final decision.

(The above story first appeared on LatestLY on Mar 29, 2022 03:20 PM IST. For more news and updates on politics, world, sports, entertainment and lifestyle, log on to our website latestly.com).