Drills also involved more than 100 soldiers rehearsing what to do in the event of a nuclear or chemical attack on them. 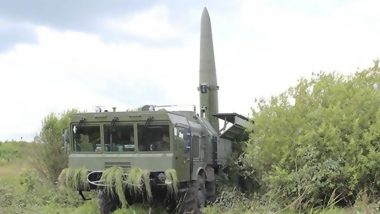 The drills did not involve any actual missiles being fired. Credits: IANS

London, May 5: Russia has carried out simulated launches of nuclear-capable missiles from an enclave of territory in mainland Europe, amid growing fears Russian President Vladimir Putin could press the button as the war in Ukraine goes against him, media reports said.

The drills did not involve any actual missiles being fired.

Drills also involved more than 100 soldiers rehearsing what to do in the event of a nuclear or chemical attack on them.

It came at the same time as Belarus - which supported Putin's invasion by allowing Russian troops to attack from its territory - staged its own war games, Daily Mail reported.

Minsk announced the 'surprise' drill Wednesday to test the reactive capabilities of its army, the Defence Ministry said, while insisting it posed no threat to its neighbours.

Belarus military units were testing their capacity to "go on the alert, move to predetermined zones and undertake combat training," the ministry said.

"The aim is to evaluate the readiness and ability of troops to react rapidly to a possible crisis," it continued, describing the manoeuvres as a "surprise" exercise.

(The above story first appeared on LatestLY on May 05, 2022 08:35 PM IST. For more news and updates on politics, world, sports, entertainment and lifestyle, log on to our website latestly.com).