What Is Howdy, Modi? Date, Theme, Venue and Time of the Event Where PM Narendra Modi Will Address Over 50,000 Indian-Americans in Presence of Donald Trump

In a major development, US President Donald Trump will join Prime Minister Narendra Modi at a mega event in Houston, called "Howdy, Modi!". The event will be a major boost to US-India, as it will be the first time that these two world leaders will be addressing a joint rally. 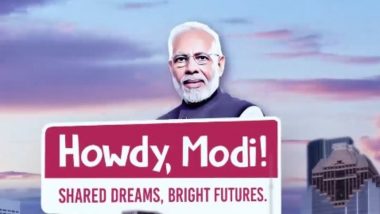 Houston, September 16: US President Donald Trump will join Prime Minister Narendra Modi at a mega meet in Houston, "Howdy, Modi!". The event will be a significant boost to India-US ties, as it would be the first time that these two world leaders will be addressing a joint rally. The Houston event comes ahead of 2020 presidential elections in which American-Indian community plays major role. Howdy, Modi Event: PM Narendra Modi Tweets Saying US President Donald Trump's 'Special Gesture' of Offering to Join Him in Houston Highlights Strong India-US Ties.

This would be the third meeting between Donald Trump and PM Modi within few weeks after G20 and G7 summits. More than 50,000 Indian-Americans are expected to attend "Howdy, Modi!". Here’s all you should know about the mega event.

"Howdy", a short form of 'How do you do?', is an informal friendly greeting commonly used in the southwestern US. Howdy, Modi is a community summit hosted by TIF (Texas India Forum) for Prime Minister Narendra Modi. During the event, PM Modi will address the Indian-American community.

The theme for "Howdy, Modi!" is "Shared Dreams, Bright Futures". It will highlight the contribution of the Indian-American community in enriching the United States for the last seven decades.

The mega event will be held at the sprawling NRG Stadium in Houston, Texas.

The summit will be held on Sunday, September 22. The official program will start from 10 am and ends at 1 pm. There will be cultural programs, followed by PM Modi's address.

Meanwhile, the Texas event will be Prime Minister Narendra Modi's third major address to the Indian-Americans after he became the Premier in 2014. The other two events were at Madison Square Garden in New York in 2014 and the Silicon Valley in 2016.

(The above story first appeared on LatestLY on Sep 19, 2019 04:38 AM IST. For more news and updates on politics, world, sports, entertainment and lifestyle, log on to our website latestly.com).