The 'Stranger' hitmaker, who is already mother to two teen sons, Sean and Jayden, with her ex-husband Kevin Federline, also said the pregnancy would likely be "hard" as she had previously experienced perinatal depression. 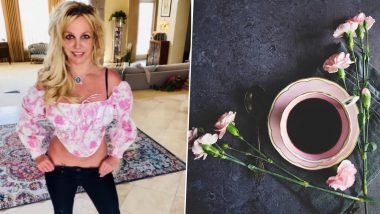 Singer Britney Spears is expecting a child with fiance Sam Asghari. On Tuesday, Britney took to Instagram and shared the good news with her fans and followers. " So I got a pregnancy test ... and uhhhhh well ... I am having a baby," she wrote. However, Britney confused fans as she mentioned in her caption that she was 'a little food pregnant' and had taken a pregnancy test after noticing that she had gained weight while on vacation. Britney Spears Shares a ‘Yummy’ Picture of Sam Asghari, Refers to Him As Her Husband in the Post (View Pic).

"I lost so much weight to go on my Maui trip only to gain it back... I thought 'Geez ... what happened to my stomach ???' My husband said 'No you're food pregnant silly," she quipped. She also informed that she "won't be going out as much" so the paparazzi cannot take photos of her for money. "It's growing !!! If 2 are in there ... I might just lose it... I obviously won't be going out as much due to the paps getting their money..shot of me...like they unfortunately already have," Britney added. Britney Spears Hugs Her ‘Love’ Sam Asghari in a Lovely Picture From Their Vacation (View Pic).

The 'Stranger' hitmaker, who is already mother to two teen sons, Sean and Jayden, with her ex-husband Kevin Federline, also said the pregnancy would likely be "hard" as she had previously experienced perinatal depression. "it's hard because when I was pregnant I had perinatal depression ... I have to say it is absolutely horrible ... women didn't talk about it back then ... some people considered it dangerous if a woman complained like that with a baby inside her ... but now women talk about it everyday ... thank Jesus we don't have to keep that pain a reserved proper secret... This time I will be doing yoga every day !!! Spreading lots of joy and love," she concluded. Britney met Asghari in 2016 when they co-starred in a music video for her single 'Slumber Party.'