According to Variety, a US-based news outlet, the special will be available on Netflix worldwide on February 14, just in time for Valentine's Day. 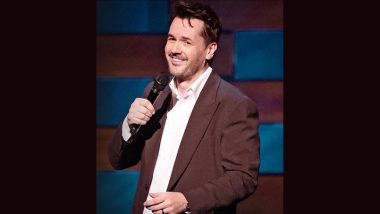 Yes... you read it right! Jim Jefferies returns to Netflix next month with High N Dry, his fifth stand-up special for the streaming service. According to Variety, a US-based news outlet, the special will be available on Netflix worldwide on February 14, just in time for Valentine's Day. The stand-up special follows Jim Jefferies: Bare (2014), Jim Jefferies: Freedumb (2016), Jim Jefferies: This Is Me Now (2018), and Jim Jefferies: Intolerant (2017). (2020). Scott Zabielski directed the new special. Cobra Kai Season 6: The Popular Sequel Of The Karate Kid Franchise To Return For Final Season At Netflix.

In fact, starting with Contraband in 2008, High N' Dry is Jefferies eighth TV stand-up unique overall. The subtitle reads, "In the special, newly married and loving life with his wife and kids, Jefferies sounds off on the laziness of koala bears, the injustices of male pattern baldness and why he'll never drink again."

As per a report by Variety, the Give'em What They Want Tour of 2023 is currently underway, according to Jefferies. " I Don't Know About That with Jim Jefferies", which Jefferies also hosts, is a podcast. Girls Trip Sequel With Tiffany Haddish, Queen Latifah, Regina Hall and Jada Pinkett Smith To Take Place in Ghana.

At 2019 Just for Laughs festival, Jefferies was recognised as the year's best stand-up comedian. The Jim Jefferies Show, which has three seasons on Comedy Central from 2017 to 2019, as well as the FX series Legit, which he wrote, executive produced, and appeared in, are among his works. Me and My Mates vs. the Zombie Apocalypse, an Australian movie, had Jefferies as a lead. He appeared in 2021 episodes of The Librarians, Bad Judge, and History of Swear Words, among other shows.