Queen Elizabeth Gets Own Barbie Doll On Her 96th Birthday 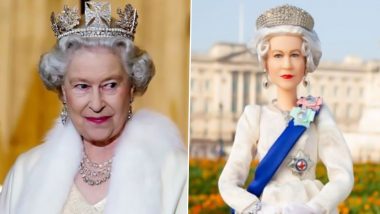 Queen Elizabeth and Her Own Barbie Doll (Photo Credits Twitter)

On the occasion of the British monarch's 96th birthday, Barbie's tribute series honoured Queen Elizabeth, by dedicating a Barbie doll in her likeness. Queen Elizabeth is celebrating her 96th birthday today. As per the pictures obtained by People magazine, the British monarch got her own Barbie doll in her likeness, inspired by one of her most iconic looks. Priyanka Chopra Shares a Beautiful Weekend Sunkissed Selfie, Fans Call Her ‘Beautiful as Always Queen’.

The picture sees the doll wearing an elegant ivory gown and blue ribbon adorned with decorations of order. Her regal ensemble is completed with a stunning tiara based on Queen Mary's Fringe Tiara, which Queen Elizabeth II wore for her wedding to Prince Philip, and matching accessories. Pabllo Vittar Becomes the First Drag Queen to Perform at #Coachella. – Latest Tweet by Pop Crave.

As per the outlet, the Queen Elizabeth Barbie doll will cost USD 75 and will be available beginning Thursday on Amazon, Walmart, Target and Mattel. For the unversed, Barbie's Tribute Series launched last year, with the first doll in the collection paying tribute to iconic comedian and actor Lucille Ball. People magazine reported that Buckingham Palace has announced a weekend of celebrations and an extended bank holiday, spanning from June 2 until June 5 to celebrate the Queen's Platinum Jubilee.

The actual date of the Queen's Platinum Jubilee was February 6, 2022, but plans had been made to celebrate the event in June. Events will include Trooping the Colour (the annual public festivities for the Queen's birthday), the lighting of Platinum Jubilee beacons, a service of Thanksgiving at St Paul's Cathedral, the Derby at Epsom Downs, a live concert called 'Platinum Party at the Palace,' the Big Jubilee Lunch and the Platinum Jubilee Pageant.