It was for the first time in the Grammys history that a track from an unreleased film won the award. 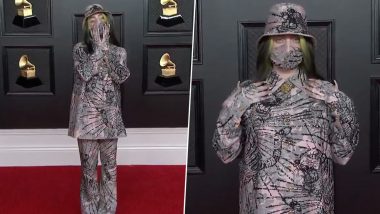 Singer Billie Eilish and her brother Finneas won the best song written for visual media Grammy award for their James Bond theme from the unreleased No Time to Die movie. It was for the first time in the Grammys history that a track from an unreleased film won the award. In the past, the song, titled "No Time to Die", would have been disqualified, but the Grammy soundtrack committee tweaked its rules amid the coronavirus pandemic, which had a huge impact on movie release calender. Grammys 2021 LIVE UPDATES: Billie Eilish Bags The Record of the Year Award.

"No Time to Die", the 25th film in the James Bond franchise, was initially suppose to arrive in theatres in April 2020, but was pushed several times amid the pandemic. The film is now slated to hit the theatres on October 8, 2021.

Eilish, the youngest musician to write a James Bond theme song, released "No Time to Die" track last year on February 13. The singer-songwriter, who also performed during the 63rd annual show, accepted the award during the pre-show. Grammys 2021: Beyonce Becomes the Most Awarded Singer in History With 28 Wins.

Other winners in the visual media category were filmmaker Taika Waititi for best compilation soundtrack for 2019's black comedy "JoJo Rabbit" and Icelandic composer Hildur Guðnadottir for the "Joker" score. Eilish was also nominated for song of the year, record of the year, and best pop solo performance for her track “Everything I Wanted”. The 2021 Grammy Awards were hosted by Trevor Noah.