The Army not only guards the Line of Control (LOC) in Jammu and Kashmir's Poonch but is also helping young students achieve their dreams. 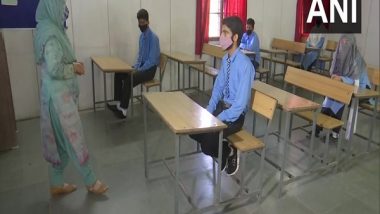 Poonch, July 15: The Army not only guards the Line of Control (LOC) in Jammu and Kashmir's Poonch but is also helping young students achieve their dreams.

The Pinewood School, which has been established by the Army, has all the modern facilities which only city schools have. The Army is making all possible efforts to ensure that no barrier comes in the way of the education of these students. First Batch of Women Military Police Inducted Into Indian Army; Attestation Parade at the Dronacharya Parade Ground in Bengaluru.

Speaking to ANI, Safia, a student of the Pinewood School said, "Our school is along the Line of Control but we are being provided with all those facilities which are available in all city schools, for example, we have smart classrooms, we have a library with all kinds of study material, we have a science laboratory with proper equipment to conduct experiments. So all these facilities are being provided by the Army which are usually only seen in city schools."

"The way the Army not only guards our border but also works for the welfare of the people inspires me. I am thankful to them for doing such philanthropic work. I want to join them in their efforts. I aspire to join the Army so that I can also serve the nation," she said.

Safia further said, "Shelling is a common occurrence in this area. In such a situation the Army always protected us. They have provided us with bunkers on the school premises. Whenever shelling occurred, we moved to the bunkers and the Army ensured that our study does not get disrupted due to these activities."

"We continue to take classes in those bunkers. Even during the pandemic, the Army supported us and made every needed thing available to us. So, I feel that the way they are putting in so many efforts for the people, similarly I too want to join the Army and work for the welfare of my country," she added.

"The Army built bunkers for us in the school so that whenever shelling occurred, we could securely take our classes there. Also during the pandemic, when schools were shut, they ensured that teachers could safely reach our homes and conduct home classes," said Nayta Tabasum, another student.

Abshan Zamir, another student, said, "There are students in our school who come from far-flung areas. The biggest challenge for them was transportation.

Some had to miss many of their classes since they failed to reach in time. The Army ensured that vehicles pick students at fixed timings and drop them back home after classes. This acted as a big relief to students. There are a few private schools too in this area."

"Our school has proper wifi connectivity, e-classes. If due to some reason the teacher is not available, students can study themselves online. Also, we have a good library with high-quality study material. Students belonging to Below Poverty Line (BPL) groups are being provided concessions on their education," said Zamir.

Bilkis Akhtar, a teacher at the school said, "This area is one of the backward areas of the Union Territory. There are many issues concerning this area including transport. Despite this, our school has projectors, language labs. Teachers are also highly qualified and they cooperate with the students."

"During the pandemic when the lockdown was enforced, the teachers ensured that students receive their notes and even conducted community classes so that their studies are not affected. And the Army has a big role to play. They have provided many facilities for the students as well as the teaching staff," said Akhtar.

Another teacher, Zahoor Ahmad said, "This school falls in a remote area, along the LOC. We have projectors, internet facilities, a science lab, a language lab, a library. During the pandemic, it was very difficult for us to teach the students as the schools were shut. The Indian Army went from home to home and persuaded students, gathered them and organised community classes to ensure that their students are interrupted due to the lockdown."

"The school also has bunkers. When sudden shelling occurs, a siren rings and students are shifted to those bunkers where they continue to take their classes," he added.