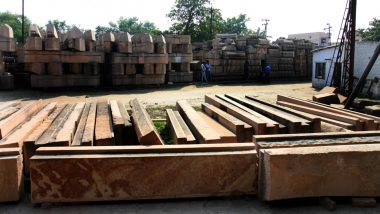 Ayodhya, Aug 2: Preparations for the foundation stone-laying ceremony of the Ram Temple in Ayodhya are in full swing. Uttar Pradesh Chief Minister Yogi Adityanath will visit here on Sunday for the second time in a week to take stock of preparations.

Prime Minister Narendra Modi is scheduled to lay the foundation stone of the Ram Temple here on August 5 after which the construction of the temple will commence in Ayodhya. Several dignitaries are expected to participate in the ceremony. Ram Temple Bhoomi Pujan: Several Places in Ayodhya Illuminated Ahead of Foundation Stone Laying Ceremony on August 5 (Watch Video).

Speaking to ANI BJP veteran leader who has been closely associated with Ram Temple Movement Vinay Katiyar told ANI that with the Prime Minister arriving at Ayodhya on August 5 for laying the foundation stone of Ram Temple it is the responsibility of the Chief Minister of the State that he should oversee the preparations.

Preparations for decorating the whole of Ayodhya is also being carried out under the supervision of Uttar Pradesh Chief Minister Yogi Adityanath. On Saturday several areas of Ayodhya were illuminated with diyas (earthen lamps) and colourful lights.

Over the last one month all the top officials of the state, including Deputy Chief Minister Keshav Prasad Maurya have also visited Ayodhya. Be it the widening of the roads or the other developmental activities in Ayodhya. The picture of the whole city looks like changed now.

On Saturday, Senior Superintendent of Police (SSP), Ayodhya, said that Covid-19 protocols have been put in place.

"We have requested everyone to not let more than five people gather at a place. We have also planned route diversions at 12 places to ease traffic movement," the SSP said.

A local resident of Ayodhya Ramesh told ANI that commencement of work for the Ram temple was a proud moment for them. "This is a historic moment for us and govt is doing wonderful work for all-round development of this city," he said.

The Supreme Court, on November 9 last year had directed the Central government to hand over the site at Ayodhya for the construction of the Ram Temple.