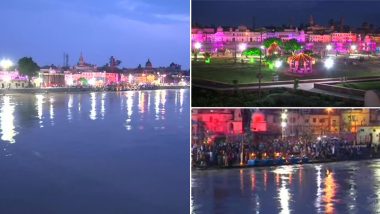 Ayodhya, August 1: Ayodhya is gearing up for Ram Temple Bhoomi Pujan celebration which is scheduled to take place on August 5. Ahead of the grand event, several parts of Ayodhya were illuminated with colourful lights. The video of celebrations in Ayodhya was shared by news agency ANI. Ram Temple Bhoomi Pujan: Ayodhya Houses Painted Yellow for Temple Construction Ceremony.

Prime Minister Narendra Modi will lay the foundation stone of Ram Temple on Tuesday. According to reports, buildings across main roads of Ayodhya were decorated with paintings from Ramayana. For Bhoomi Pujan,, reportedly over 50,000 earthen and copper kalash carrying soil and water of different religious places across India have reached the city.

Video of Celebrations in Ayodhya:

The Ram temple will have five domes and one tower, increasing the temple height by 20 feet to 161 feet. The temple will be built in Nagara style, following the principles of Vastu Shastra. The temple design finalised in the 90s had visualised a double-storeyed structure with three 'mandaps' or domes and one 'shikhar' or tower.

(The above story first appeared on LatestLY on Aug 01, 2020 09:23 PM IST. For more news and updates on politics, world, sports, entertainment and lifestyle, log on to our website latestly.com).