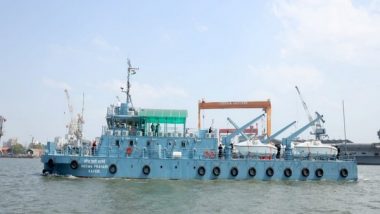 A senior BSF officer told ANI that FBOP vessels play a crucial role while protecting maritime borders as they help in demarking borders on waters.

The officer said that these vessels will act as a floating base for the flotilla of fast patrol boats and will supply petrol, drinking water, provisions to the smaller boats and will be deployed on India's eastern and western borders.

The three indigenously build FBOP vessels will act as the strategic base stations at India's border with Pakistan and Bangladesh.

These vessels are important for the nation with regards to its safety and will also help in boosting the business through the country's coastal and inland waterways.

Cochin Shipyard Limited (CSL) delivered the three FBOP vessels to the BSF, which will provide land and riverine security along 3,323 km of India-Pakistan and 4,096 km of India-Bangladesh international borders.

With the induction of the second batch of FBOP vessels, the total number of such vessels in the BSF fleet has now reached 12.

The three FBOP's, with a length of 46 meters, are part of a series of nine vessels being built for the Water Wing of the Border Security Force. These vessels are designed in-house by CSL and classed by the Indian Register of Shipping. Each FBOP is designed with storage arrangements for four fast patrol boats, which can be launched and hoisted using its davit system.