A clash broke out between police and locals after the latter tried to enter the collector's office over the Rowghat iron ore mining project in Narayanpur district on Friday. 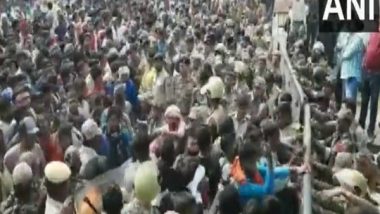 Raipur, April 2: A clash broke out between police and locals after the latter tried to enter the collector's office over the Rowghat iron ore mining project in Narayanpur district on Friday.

Thousands of villagers from 22 villages gathered at Binjali village and marched towards the Collector's office in Narayanpur district to submit a memorandum demanding to halt the Rowghat project. Chhattisgarh CM Bhupesh Baghel Bags Best Chief Minister Tag as Per IANS-CVoter Governance Index.

The police tried to stop the protestors by putting barricades, however, the protestors broke through the barricades and reached the Collector's office. "We have taken their memorandum. We will take necessary steps after examining it, "Jitendra Kurre, District Collector, Narayanpur.

According to the police, some protestors and police personnel were injured. Narayanpur Additional Superintendent of Police (ASP) Neeraj Chandrakar, stated, "The injured personnel was shifted to a local hospital".

A delegation was allowed to meet Collector Rituraj Raghuvanshi. Despite this, some protesters shouted slogans against the administration for hours and forcefully entered the premises which led to a scuffle between the police personnel and protestors.

Consequently, the police had to use baton charges to dissipate the protestors, as per the purported videos. Meanwhile, the Collector came out of his office and met the villagers and promised them to fulfill their demands.

The villagers in their memorandum submitted to the Governor stated that they would not allow mining at Rowghat Hill as it is their place of worship. They also claimed that mining will also destroy minor forest produce which is their source of livelihood for the people living in 22 villages.

Earlier in January this year, Bhilai Steel Plant (BSP), which has been allotted Rowghat mines, received permission from the Union Ministry of Environment to mine three lakh tonnes of iron ore per annum from the Anjrel area (which falls in Narayanpur) and transport it by roads.