No casualty was reported in the incident that took place around 2.30 am today. 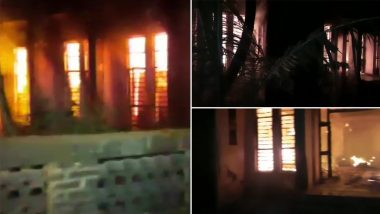 Thane, February 7: A fire broke out at the State Electricity Distribution Company office in Khajuri area of Thane district of Maharashtra on Sunday.

Fire Breaks Out at Thane MSED Office in Khajuri Area

Maharashtra: Fire broke out early in the morning at the Maharashtra State Electricity Distribution Company office in Khajuri, Thane

Visuals of the fire fighting operation & the flames, from the area pic.twitter.com/m352N3npSI

Police and fire tenders are present at the spot with two fire engines, two rescue vehicles, and four water tankers. However, no casualty reported so far.