Following the deaths of patients at Goa Medical College & Hospital due to lack of oxygen during the past two weeks, Goa Congress president Girish Chodankar said the Congress would file a criminal complaint against Chief Minister Dr Pramod Sawant and Health Minister Viswajit Rane. 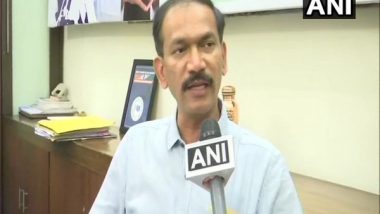 Panaji, May 14: Following the deaths of patients at Goa Medical College & Hospital due to lack of oxygen during the past two weeks, Goa Congress president Girish Chodankar said the Congress would file a criminal complaint against Chief Minister Dr Pramod Sawant and Health Minister Viswajit Rane.

As per the official press statement, Chodankar said that the candid admission by Goa's BJP government before the High Court of Bombay at Goa that there is a substantial deficit of Oxygen supply shows that it is irresponsible and insensitive. He also added that the state is run by incompetent and defective Chief Minister and Health Minister. No COVID-19 Vaccination in Mumbai on May 15 & May 16, Says BMC.

Chodankar said that patients dying due to insufficient supply of oxygen are nothing but cold-blooded murder of COVID patients by CM and HM. "If health minister admits on camera that he was aware that patients were dying between 2-6 AM on a daily basis and that the death toll in Goa would be around 200-300 per day, why did he not act upon it and ensure that such a calamity is averted. What action had the CM and HM specifically taken to stop COVID deaths regularly between 2 AM and 6 AM?" Chodankar questioned.

The Goa Congress president said that the Congress party is going to file a criminal complaint against both for culpable homicide. He said, "What the duo (Pramod Sawant and Vishwajit Rane) has committed is more horrific than a genocide. They overlooked these deaths on a regular interval and deserve treatment only fit for criminals,"

Chodankar said that as of Thursday (May 13), there were a total of 1937 COVID-related deaths, out of which only 41 were officially accepted by the government before the court as deaths due to oxygen shortage. He added that the Goa Congress hopes that the HC will order an impartial inquiry by a retired High Court Judge to ascertain the truth.

In the press statement, Chodankar stated that BJP Government in Goa has made a "Business from peoples' sickness" since the COVID pandemic outbreak in India which PM Modi calls 'Aapda mein avsar' (opportunity in crisis).

"For the CM and HM, the 'aapda mein avsar' was in fact only the commission which they were eying for, from the purchase of crores of Ivermectin tablets, which have been mysteriously made a part of the COVID protocol in Goa. The focus of the CM and HM on this commission which runs into crores of rupees was one of the key reasons why the government collectively failed to prevent people from dying due to oxygen shortage," he said.

He also pointed at the irony that the Union Home Minister Amit Shah had the time to settle a commission dispute between Goa BJP's two "political brats" and not to focus on preventing the scores of deaths for the mass murders at Goa's hospitals on the BJP's watch.

Chodankar opined that if Goa had a full-time Governor in the form of Satyapal Malik, it could have helped save hundreds of lives of innocents. He said, "A part-time Governor in the form of Bhagat Singh Koshyari has failed to implement the necessary checks and balances in matters of governance, which the Constitution of India provides. When the CM and HM failed in their duties during the first Covid wave, it was Malik who had taken charge of affairs and brought relief to Goa, which was reeling from the crisis,"

"We will file a criminal complaint against both and if needed, will move to court of law for justices to innocents who were killed by both," said Chodankar in this statement.