PM Narendra Modi Says, ‘BJP Government Tried To Shield Farmers Though Prices of Fertilizers Shot Up in Global Markets Due to Pandemic, War’

Prime Minister Narendra Modi on Saturday said his government has tried to ensure that farmers in the country are not affected even though the prices of fertilizers in international markets have soared due to the pandemic and ongoing war in Ukraine. 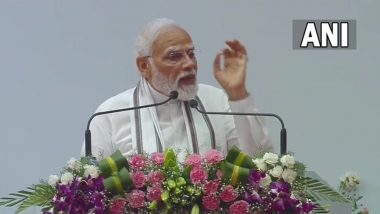 Gandhinagar, May 28: Prime Minister Narendra Modi on Saturday said his government has tried to ensure that farmers in the country are not affected even though the prices of fertilizers in international markets have soared due to the pandemic and ongoing war in Ukraine.

Inaugurating virtually a `nano urea' plant of the Indian Farmers Fertilizer Cooperative Ltd (IFFCO) in the district, he said eight more such plants will be set up, and they can reduce our foreign dependence and save money. Madhya Pradesh Shocker: 16-Year-Old Girl Gangraped by 3 in Gwalior, Forced to Take Contraceptives; Two Arrested.

The prime minister addressed the 'Sahkar Se Samruddhi' conclave of cooperative entities at the Mahatma Mandir auditorium here. He inaugurated the IFFCO plant virtually during the same event.

“With the liquid urea plant, the power of a full sack (50 kg) of urea has come into a half-litre bottle, leading to huge savings in transportation and storage. The plant will produce about 1.5 lakh bottles of 500 ml per day,” he said, adding that eight more such plants will be set up in the country.

“This will reduce foreign dependence with regard to urea, and save the country's money. I am confident that this innovation will not remain restricted to urea. In the future, other nano fertilizers will be available to our farmers," he said.

The nano-technology will be crucial for achieving the goal of Atma-nirbharata (self-reliance), the prime minister said.

“Despite difficulties due to the international situation arising out of COVID-19 pandemic and more recently, the Russia-Ukraine war, which raised the cost and made procurement hard, the government has tried to ensure that it will face the difficulties without letting the farmers get affected,” he added.

Similarly, for every bag of DAP (Di-ammonium Phosphate), government bears a cost of Rs 2,500 against Rs 500 borne by earlier governments, Modi said.

"The Union government gave a subsidy of Rs 1,60,000 crore last year for fertilisers. This year this subsidy is going to be more than Rs 2 lakh crore,” he said.

"We should think whether in the 21st century we should keep our farmers dependent on international situations. Shouldn't the lakhs of crores of rupees that are sent abroad (for importing fertilizers) be put to the use of farmers? Shouldn't we think of a permanent solution to reduce the increasing cost of farmers due to costly fertilisers?" he said.

His government has worked to provide both immediate and long-term solutions to the problems being faced by the country, he said, citing improvement in the health infrastructure to deal with future pandemic shocks, `Mission Oil Palm' to tackle edible oil supply issues, bio-fuel and hydrogen fuel projects to handle fuel problems and the stress on natural farming and nano-technology.

"Large-scale investment in nano-technology is a result of the same effort. To encourage farmers to adopt natural farming is also a part of the same permanent solution," he said.

“Solution to many of India's difficulties lies in self-reliance. A co-operative is a great model of self-reliance," the prime minister said.

Both Mahatma Gandhi and Sardar Vallabhbhai Patel showed the way for bringing self-sufficiency to villages, and in the same spirit, his government is moving ahead on the path of developing model cooperative villages, Modi said.

Six villages in Gujarat have been chosen for this, he added.

Dairy, sugar and banking sectors are examples of the success of the cooperative revolution, the PM said, adding that it has expanded to other areas as well.

Cooperative dairies are a way to strengthen the rural economy, he added.

"If we are seeing higher rural prosperity, then dairy sector- related cooperatives are a big reason," he said.