Facing increasing pressure from Opposition parties to quit over his jailed son, who is accused of running over farmers in Uttar Pradesh's Lakhimpur Kheri, Minister of State for Home Ajay Mishra Teni on Thursday joined office and held department related meeting with officials. 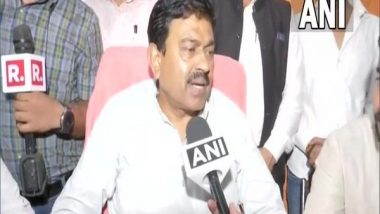 New Delhi, December 16: Facing increasing pressure from Opposition parties to quit over his jailed son, who is accused of running over farmers in Uttar Pradesh's Lakhimpur Kheri, Minister of State for Home Ajay Mishra Teni on Thursday joined office and held department related meeting with officials.

The MoS reached the Ministry of Home Affairs around 10.15 am and later engaged in official works, a day after he was seen in a video lunging at a journalist and throwing abuses at the media.

Also Read | Delhi: Man Arrested For Stabbing Restaurant Worker After He Refuses To Share Liquor With Him.

The Minister took detailed information related to his department and subsequently held a meeting with Home Ministry officials.

The Minister was seen in the video in Lakhimpur Kheri where he had visited to inaugurate an oxygen plant, a day after his son Ashish Mishra was sent in jail.

The video shows the Minister shouting and hurling abuses at a reporter. Opposition demands for Mishra's sacking from the Union Cabinet have become louder after a Special Investigation Team report said the killing of farmers at Lakhimpur Kheri on October 3 was a "planned conspiracy".

The farmers were crushed, allegedly by an SUV driven by Ashish Mishra, "with intent to commit murder" and it was "not death by negligence", the report said.

It also recommended that the charges of rash driving against Ashish Mishra and the others be modified and an attempt to murder charge and the charge of voluntarily causing hurt to be added.

Ashish Mishra and others are already facing murder and conspiracy charges.

The Lok Sabha also adjourned on Wednesday and on Thursday till 2 pm over ruckus created by Opposition leaders on the Lakhimpur Kheri incident.

The Congress leaders on Wednesday also moved notice over the issue a day after the Special Investigation Team (SIT) probing the Lakhimpur Kheri violence incident demanded the 13 arrested accused, including MoS Ajay Mishra Teni's son Ashish, to be charged with attempt to murder.

The SIT on the basis of investigation also moved the court for adding charges of attempt to murder, voluntarily causing grievous hurt by dangerous weapons, and acts done by several persons in furtherance of common intention.