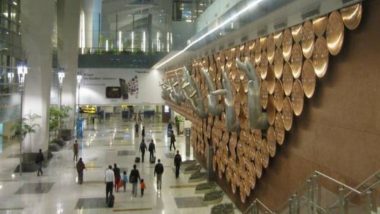 New Delhi, November 5: Security has been tightened at the Indira Gandhi International Airport after inputs have been received by the police regarding threats from Sikhs for Justice (SFJ) for disrupting flight operations.

"We have got inputs that Sikhs for Justice (SFJ) has threatened that two Air India flights scheduled for London tomorrow won't be allowed to operate. The security has been tightened," Rajeev Ranjan, DCP, Indira Gandhi International Airport said. Also Read | Rescue Operation Continue to Save a 3-Year-Old Boy, Who Fell into an Open Borewell in MP: Live Breaking News Headlines Updates on November 5, 2020.

SFJ is a banned US-based secessionist group that supports the secession of Punjab from India as Khalistan.