Get latest articles and stories on India at LatestLY. Taking a dig at the BJP-led Central government, the Uttarakhand Congress on Friday termed the "extinguishing" of Amar Jawan Jyoti at India Gate as the "king's arbitrariness" to build his palace, "Modi Mahal". 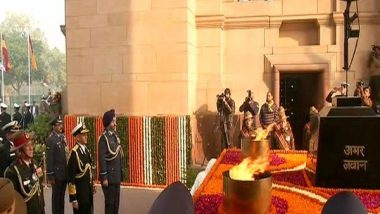 Dehradun (Uttarakhand) [India], January 21 (ANI): Taking a dig at the BJP-led Central government, the Uttarakhand Congress on Friday termed the "extinguishing" of Amar Jawan Jyoti at India Gate as the "king's arbitrariness" to build his palace, "Modi Mahal".

"Amar Jawan Jyoti has been burning continuously for the last 50 years. It is a symbol of our bravery, courage, sacrifice and self-respect, but today it will be extinguished. The new address of Amar Jyoti established for 50 years at India Gate will now be War Memorial. When the symbolic place of martyr's sacrifice and valour is changed to build a king's palace and the flame that burns relentlessly is extinguished, it not only tells the story of that king's arbitrariness but also the respect in his heart towards the martyrs", stated a Uttarakhand Congress official release.

Also Read | Paddy Should Be Procured From Every Eligible Farmer, No Delay in Payments: CM Yogi Adityanath Tells Officials.

The Congress further informed that in the Indo-Pak war of 1971, this Amar Jawan Jyoti was established by Prime Minister Indira Gandhi in honour of the brave Indian soldiers as a symbol of the indomitable courage, valour and sacrifice of the Indian Army.

Congress also claimed that the BJP led Central government has refused to show enough respect to Indira Gandhi and the patriots who led India to victory in the 1971 Indo-Pak war. "Can the Government of India not light the flames at two places for the bravery, sacrifice, renunciation, penance, the valour of our country? The present BJP government also dropped the name of Mrs Indira Gandhi, who led India during the historic victory of the Indo-Pak war of 1971, in the official program of Vijay Diwas on 16 December 2021. You will extinguish the flame, but how will you extinguish the flame of respect, respect and dedication for Mrs Indira Gandhi and the Indian Army in the hearts of crores of Indians?", claimed the Uttarakhand Congress. (ANI)