West Bengal Governor Jagdeep Dhankhar will meet Union Home Minister Amit Shah at his official residence in Delhi on Saturday at 11 am. 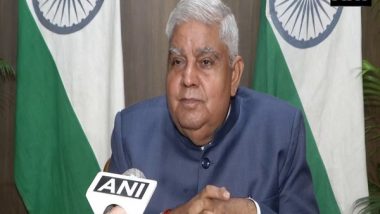 "Governor WB Jagdeep Dhankhar will call on the Union Home Minister Shri Amit Shah at his official residence at 11 am today before returning to Kolkata in the afternoon," tweeted Dhankhar's office.

Dhankhar had a meeting with Shah on Thursday as well. He extended his stay at the national capital for today's meeting with the Union Home Minister.

Dhankhar had arrived in Delhi on June 16.

Over the past few weeks, Governor Dhankhar has raised concerns regarding the alleged incidents of political violence in West Bengal. (ANI)