ITBP QRT teams have been deployed at Hoogly river crossing in Purba Bardhaman district where polling for the sixth phase is underway. 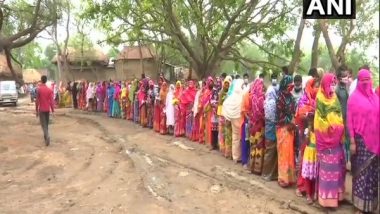 Voters queue up at a polling booth in Banpara during the sixth phase of West Bengal polls on Thursday. [Photo/ANI]

BJP candidate from Raiganj, Uttar Dinajpur, Krishna Kalyani also cast his vote at booth number 134. Speaking to ANI, Kalyani said, "Voting began a little late. It's a festival of democracy and everyone is participating. You can see the queues, it shows that this time voting will be for change, development." West Bengal Assembly Elections 2021 Phase 6 Live Streaming: Watch Live Updates on Voting in 43 Vidhan Sabha Seats on News18 Bangla.

Meanwhile, voting at a polling station in the Raiganj constituency of North Dinajpur district got delayed by over an hour due to a technical glitch. While voting at the remaining polling booths in the district commenced at 7 am, it started at 8.17 am at booth number 134 at Raiganj Coronation High School.

In the same constituency, local residents of Indira colony blocked roads for hours protesting against the establishment of a polling booth inside the Raiganj Medical college and Hospital premises.Locals alleged that an isolation ward at the hospital was converted into a polling booth, and refused to cast their votes at the booth. Following the protest, the administration took action and got the polling station sanitised. Only after getting repeated assurances from a returning officer did the voters agree to cast the vote.The polling officers are maintaining all the respective measures to ensure the safety, said a voter.

A voter at a booth near nandigram village, Katwa, Purba Bardhaman was given first aid by ITBP medics. ITBP QRT teams have been deployed at Hoogly river crossing in Purba Bardhaman district where polling for the sixth phase is underway.

Drones are being used for security surveillance in the area near booth number 131-132 in Amdanga, North 24 Paraganas. As many as 306 candidates, including 27 women, are in the fray in this phase of the assembly elections.Over 1.03 crore voters, including 50.65 lakh women and 256 of the third gender, will be deciding the fate of these candidates across 14,480 polling stations in the sixth phase.

Among the 43 constituencies, nine are in Uttar Dinajpur, eight in Purba Bardhaman, nine in Nadia and 17 are in the North 24 Parganas district. TMC and BJP are contesting all 43 seats. Congress, the Left parties and the Indian Secular Front have made a coalition and are contesting under the banner of Samyukta Morcha. Out of the 43 seats in this round, Congress has got 12 in its share, CPI(M) got 23, All India Forward Bloc (AIFB) got four and CPI has got two seats. Bahujan Samaj Party (BSP) is also trying its luck and has fielded 37 candidates.

Polling for phases 1, 2, 3, 4, and 5 of the state elections took place on March 27, April 1, April 6, April 10, and April 17, respectively. Polling for the seventh and eighth phases will be held on April 26 and 29 respectively while the counting of votes will take place on May 2.