By 2025, wallets are expected to have a higher penetration and lower-income would eventually drive multiple small-ticket transactions, it said. 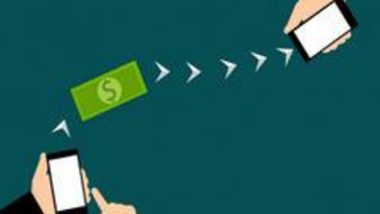 New Delhi, August 23: Digital payments in India are expected to grow over three-folds to Rs 7,092 trillion by 2025 on account of government policies around financial inclusion and growing digitisation of merchants, according to a research report. The country's digital payment market was worth around Rs 2,162 trillion in 2019-20, RedSeer Consulting said in its report.

"The current 160 million unique mobile payment users will multiply by 5 times to reach nearly 800 million by 2025. This growth will be driven by a number of demand and supply-side drivers," the Bengaluru-based management consultancy said.

"Mobile payments will drive around 3.5 per cent of total digital payments of Rs 7,092 trillion by financial year 2025, up from the current 1 per cent. The total mobile payment users who currently stand at about 162 million would reach around 800 million during this period," the report said.

According to the report, wallets will continue to play a key role in its growth with the continuous increase in both frequency and user base. By 2025, wallets are expected to have a higher penetration and lower-income would eventually drive multiple small-ticket transactions, it said.

RedSeer, which serves various e-commerce companies and venture capitalists including Tiger Global, estimates that the growth of digital payments specifically will come out by increasing penetration with offline merchants and the penetration with the unorganised retail sector will grow on the back of increased merchant digitisation in cities beyond tier II. Redseer sees COVID-19 as a catalyst to digital payments across India.

"COVID-19 seems like another demonetisation-like catalyst for the industry. Digital payment providers have been quite hands-on in terms of responding to this situation, by offering enhanced support on essentials such as offering groceries, masks, sanitisers, COVID-19 insurance, offering integration with donations to PM fund and other essential product and services," RedSeer Consulting founder and CEO Anil Kumar said.

According to RedSeer, digital payments share of grocery stores increased to 75 per cent due to COVID-19 as people preferred paying through mobile phone due to safety concerns.

"There is significant headroom for growth of EDC (electronics data capture) terminals in the small retailer universe. Large and mid-sized retailers use more than 2 EDC terminals. Today we have around 5 million terminals, which is almost 5 times that in financial year 2015," the report said.

According to the report, the payment gateway aggregator market in India, which is currently estimated to be at Rs 9.5 trillion, is expected to grow by 2.4 times driven by large value transactions. It is expected to grow at a compounded annual growth rate of 19 per cent in the next 5 years to reach Rs 22.6 trillion by FY 2025.

"The payment gateway market today is very competitive, and all leading players are fighting for the market share. Paytm leads this pack and has grown the fastest followed by BillDesk with marquee government clients," the report said.