Emmy winner Michael Constantine, best known for playing the conservative and grumpy patriarch in the blockbuster rom-com film My Big Fat Greek Wedding, has passed away at the age of 94. Constantine died on August 31 of natural causes, his agent confirmed to Variety. 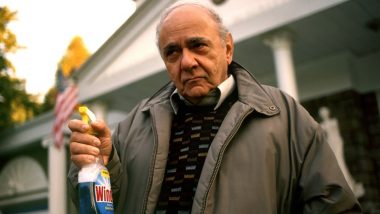 Emmy winner Michael Constantine, best known for playing the conservative and grumpy patriarch in the blockbuster rom-com film My Big Fat Greek Wedding, has passed away at the age of 94. Constantine died on August 31 of natural causes, his agent confirmed to Variety. In "My Big Fat Greek Wedding", the actor starred in the memorable role of Gus Portokalos, a restaurant owner and father of film's lead star and writer Nia Vardalos' Toula. Hugh Jackman’s Dad Passes Away; Superstar Pens a Heartfelt Post Remembering Him.

In the 2002 film, Constantine's Gus migrates to the US from his native Greece along with his family and takes immense pride in 'finding' the Greek root for any word. "My Big Fat Greek Wedding" raked in a domestic gross of USD 241 million in 2002, also scoring a SAG Awards nomination for outstanding performance by the cast of a theatrical motion picture. Constantine reprised his role in a short-lived CBS series that also starred Vardalos and Lainie Kazan, who played his on-screen wife Maria, in 2003, "My Big Fat Greek Life", and the 2016 film sequel, "My Big Fat Greek Wedding 2", which was the actor's final credit. Sarah Harding, Girls Aloud Singer, Passes Away After Battling Breast Cancer.

Vardalos took to Twitter to pay tributes to her on-screen father. "Michael Constantine, the dad to our cast-family, a gift to the written word, and always a friend. Acting with him came with a rush of love and fun. I will treasure this man who brought Gus to life. He gave us so much laughter and deserves a rest now. We love you Michael," she wrote. Prior to "My Big Fat Greek Wedding", Constantine was best known as a television actor who played principal Seymour Kaufman on the high school comedy "Room 222", which ran on ABC from 1969-74.

He was nominated two times in a row for his performance on "Room 222", eventually landing his first win in 1971. Born as Constantine Joanides in Reading, Pennsylvania, the actor began his career on the New York stage. He made his small-screen debut in the very early days of the medium with a single appearance on "The Big Story" for NBC in 1949. On Broadway, he appeared in "Compulsion", a play based on the Leopold and Loeb case starring Dean Stockwell and Roddy McDowall, in 1957-58. His other stage credits include "The Miracle Worker", "The Egg" and "Arturo Ui".

While appearing on Broadway and on other stages, he made ends meet by working as a night watchman and a barker in a shooting gallery. And it was in 1959 that he made his feature film debut in Howard W Koch's death row picture "The Last Mile", starring Mickey Rooney. He later featured in the classic 1961 pool picture "The Hustler", starring Paul Newman. In 1976, Constantine got his own show, a forerunner of "Night Court" called "Sirota's Court", the 13-episode NBC comedy in which he starred as Judge Matthew Sirota.

On the big screen the same year, he played one of many German Jews seeking to flee the Nazis in the feature "Voyage of the Damned", starring Faye Dunaway, Oskar Werner and Lee Grant. He guest starred on a wide variety of TV series for decades including "The Untouchables", "The Twilight Zone", "Perry Mason", "The Dick Van Dyke Show", among several others. Constantine also recurred on "Remington Steele" as an idiosyncratic businessman -- and appeared memorably in a 1994 episode of "Law & Order". He further starred in "The Juror", starring Demi Moore and Alec Baldwin, and "Stephen King's Thinner" -- both films released in 1996. ?PTI RDS