According to People magazine, during her own recent interview with Access Hollywood, Michelle was asked about her thoughts on the Duke and Duchess of Sussex's headline-making interview. 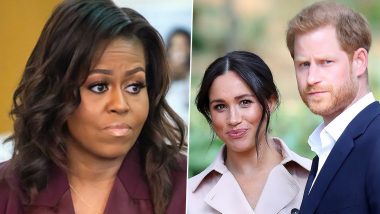 Writer and former first lady of the US, Michelle Obama recently shared her thoughts regarding Meghan Markle and Prince Harry's bombshell interview with Oprah Winfrey. According to People magazine, during her own recent interview with Access Hollywood, Michelle was asked about her thoughts on the Duke and Duchess of Sussex's headline-making interview which aired last week. Prince William Reacts To Racism Allegations Made On Meghan Markle-Prince Harry-Oprah Winfrey Interview ; Says ‘We Are Very Much Not A Racist Family’ (Watch Video).

Michelle said, "My hope is that, when I think about what they're going through, I think about the importance of family and I just pray that there is forgiveness and there is clarity and love and resolve at some point in time." She added, "Because there's nothing more important than family." Meghan and Harry, during the interview, had opened up about their time as senior royals. Among the revelations, the Duchess of Sussex said there were "concerns and conversations about how dark her son Archie's skin might be when he's born". Piers Morgan Quits ITV’s Good Morning Britain After His Remarks on Meghan Markle and Prince Harry.