Prince William Reacts To Racism Allegations Made On Meghan Markle-Prince Harry-Oprah Winfrey Interview ; Says 'We Are Very Much Not A Racist Family' (Watch Video)

Meghan Markle and Prince Harry's interview with Oprah Winfrey opened a can of worms. The Royal Family also took note of everything that the couple said including the racism allegations. Now Prince William was caught telling a reporter that the Royal family is not racist at all. 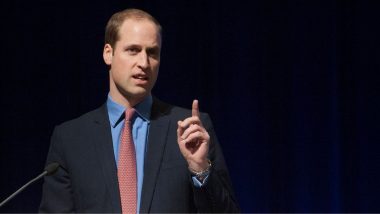 Meghan Markle and Prince Harry's all-revealing interview with Oprah Winfrey opened up a pandora's box. The couple discussed everything from the Royal family casting aspersions on Archie's skin colour before his birth to Markle having suicidal thoughts. Quite obviously social media erupted with everyone busy taking sides. Now Prince William was caught at an event recently where he was asked about the racist allegations. The future King of England asserted that they aren't a racist family. John Oliver’s 2018 Warning for Meghan Markle Goes Viral After Oprah Winfrey Interview

William and his wife Kate Middleton made a public appearance in London when someone asked them about the interview. William admitted that he hasn't spoken to his brother and will do so soon.

“We are very much not a racist family,” Prince William told reporters during a visit to a school in Stratford, London.

When asked if he had spoken to Prince Harry after the Oprah interview, he added, “No, I haven’t spoken to him yet, but I will do.”pic.twitter.com/MjTOeH7u6Z

Buckingham Palace had also issued a statement on the day the interview came out saying that they are taking serious note of the allegations. The statement said that the family is saddened by the extent of how challenging the past three years have been for Meghan and Harry with the family.

(The above story first appeared on LatestLY on Mar 11, 2021 06:16 PM IST. For more news and updates on politics, world, sports, entertainment and lifestyle, log on to our website latestly.com).