The 25-second clasp was additionally shared on their Instagram. The regal couple dumped their past KensingtonRoyal handle. 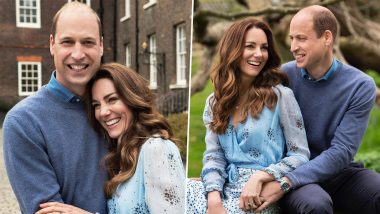 The Duke and Duchess of Cambridge Prince William and Kate Middleton on Wednesday, launched their own YouTube channel on the online platform by sharing a new promo video. The 25-second clasp was additionally shared on their Instagram. The regal couple dumped their past KensingtonRoyal handle for 'dukeandduchessofcambridge, Fox News detailed. Toward the beginning of the video, the couple is seen relaxed at their Norfolk home. Prince William, Prince Harry Won’t Walk Next to Each Other at Prince Philip’s Funeral, The Buckingham Palace Confirms.

The 38-year-old Prince William turned to Middleton and joked, "By the way you need to be careful what you say now because these guys are filming everything." The promotion at that point proceeds to show different royal engagements, along with candid moments. In one behind-the-scenes clip, Middleton is seen instructing her husband, "You don't need to roll your Rs" from this year's St. Patrick's Day. Prince William Skips the BAFTA Awards Ceremony Following Prince Philip’s Death.

As announced by Fox News, the couple's YouTube channel as of now has a broad playlist of recordings from past engagements and visits. The launch came only days after William and Middleton uncovered a sweet, 40-second video of the parents playing outside with their three children: 7-year-old Prince George, 5-year-old Princess Charlotte and 3-year-old Prince Louis. Per Fox News, that video was shared as a special thanks to fans who complimented the couple on their tenth wedding commemoration.

"Thank you to everyone for the kind messages on our wedding anniversary. We are enormously grateful for the 10 years of support we have received in our lives as a family," said their online note. They signed the post, "W & C." In the clasp, the family of five is spotted on a hike close to the sea shore with their canine. (ANI)