McCullum, who observed Buttler's brilliant IPL 2022 run closely and believes the player can work on his batting in red-ball cricket too. He believes players who have succeeded in T20 cricket can definitely bring that talent to their red-ball game. 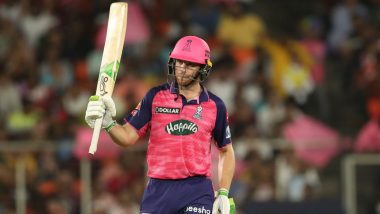 London [UK], May 29: England's newly-appointed Test head coach Brendon McCullum has hinted at a possible return of wicketkeeper-batter Jos Buttler to the English Test side.

Buttler was omitted after England's distressing 4-0 Ashes series defeat in Australia despite being one of the world's best white-ball run-makers.

Also Read | Brendon McCullum Reacts After Being Appointed As England Coach, Says 'It’s Been an Emotional Couple of Days'.

McCullum, who observed Buttler's brilliant IPL 2022 run closely and believes the player can work on his batting in red-ball cricket too. He believes players who have succeeded in T20 cricket can definitely bring that talent to their red-ball game.

"Jos is one of those players you look at instantly and think how could he be so dominant in one form of the game and not quite have found his feet, other than a few fleeting performances, in Test cricket?" ESPNCricinfo quoted McCullum as saying to Sky Sports.

"There are certain guys you look at and think there's a lot of talent that could improve the side given the right opportunity. There's no reason why, if you're good at T20, you can't bring those skills into Test cricket and you look at some of the guys who have dominated the IPL in the last two months," he added.

McCullum also opened up about reviving the Test careers of spinners Moeen Ali and Adil Rashid, even though the former is officially retired from Test format.

"Obviously you've got the likes of Livingstone, Mooen, Rashid. All these guys have played international cricket before, been successful in the other forms of the game and you'd think they'd be able to transition across," said McCullum.

The former Kiwi wicketkeeper-batter was appointed as England men's Test team's new coach earlier this month. This is his first-ever international coaching assignment. He has stepped down as the head coach of Kolkata Knight Riders head coach following his appointment.