Rory Burns and Dan Lawrence were the standout performers for the hosts as England ended at 258/7 on Day One of the ongoing first Test against New Zealand here at the Edgbaston, Birmingham on Thursday. 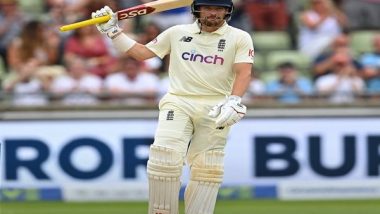 Edgbaston [UK], June 10 (ANI): Rory Burns and Dan Lawrence were the standout performers for the hosts as England ended at 258/7 on Day One of the ongoing first Test against New Zealand here at the Edgbaston, Birmingham on Thursday.

At stumps on Day One, England's score read 258/7 with Lawrence and Mark Wood still at the crease. Lawrence and Wood are currently unbeaten on 67 and 16 respectively. For New Zealand, Ajaz Patel, Trent Boult, and Matt Henry returned with two wickets each.

Opting to bat first, England got off to a steady start as openers Dominic Sibley and Burns saw off the new ball and started to move the scoreboard. The duo played out 29 overs in the first session and accumulated 67 runs. The run-scoring might have been slow, but both batsmen ensured that the hosts entered the lunch interval with all ten wickets in hand.

After the lunch break, New Zealand changed its fortunes around as the visitors got two breakthroughs in quick succession. First, Henry sent Sibley (35) back to the pavilion and in the very next over, Neil Wagner dismissed Zak Crawley (0), reducing England to 73/2 in the 31st over.

Skipper Joe Root (4) also failed to leave a mark with the bat as he was sent back to the pavilion by Henry and all of a sudden, the hosts were put on the back foot at 85/3. Ollie Pope then joined Burns in the middle and the duo added 42 runs for the fourth wicket, but the partnership was ended by Patel in the 50th over as he dismissed Pope (19), reducing England to 127/4.

After the tea break, Burns' (81) resistance also came to an end and he was finally sent back to the pavilion by Boult. This wicket put an end to a 42-run stand for the fifth wicket between Burns and Dan Lawrence. Soon after, James Bracey was dismissed for a duck by Boult and this reduced the hosts England to 175/6 in the 61st over.

In the end, Lawrence and Wood ensured that England does not lose more wickets before the close of play and the hosts have three wickets in hand.