Alexander Zverev is ready to go all the way as he made it into the maiden Roland-Garros semi-final of his career with a smooth 6-4, 6-1, 6-1 victory over world No.46 Alejandro Davidovich Fokina. 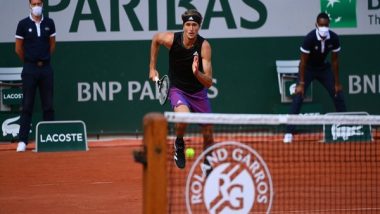 Paris [France], June 9 (ANI): Alexander Zverev is ready to go all the way as he made it into the maiden Roland-Garros semi-final of his career with a smooth 6-4, 6-1, 6-1 victory over world No.46 Alejandro Davidovich Fokina.

"Obviously it's very nice to be in the semi-final but just being here doesn't satisfy me," Zverev said on court after the win against Spaniard. "I know I'm playing pretty okay, and I hope I can continue playing the same way, maybe even better in the semi-finals and then we'll see in two days' time what it holds for me."

The German 24-year-old didn't hesitate to name his peers Daniil Medvedev and Stefanos Tsitsipas as heirs in the Grand Slam hierarchy.

"Obviously the Grand Slams are the tournaments that we want to win the most. Before, maybe the last few years, I was putting too much pressure on myself," Roland Garros quoted him.

"Also obviously in the media I was seen, before Medvedev and Tsitsipas arrived, I was seen as this guy that was going to all of a sudden take over the tennis world...I was not very patient with myself, which I feel like now maybe I learned how to deal with the situation a little bit better, I'm maybe a little bit calmer at the tournaments. But the end goal hasn't changed."

"I'm in the semi-finals of a Grand Slam and I played solid so far," Zverev said. "I know that the matches [from] the semi-finals on are not going to get easier. I think the opponents there are extremely difficult to beat, so I got to play the same or raise my level even higher to have a chance. But I'm comfortable. I'm happy. We'll see how it is on Friday. But for now, it's great to be here."

Alexander Zverev will now take on Stefanos Tsitsipas to book his berth in the final of the French Open. (ANI)