India and Kiwis will be locking horns in the WTC final at the Ageas Bowl, Southampton, beginning June 18. 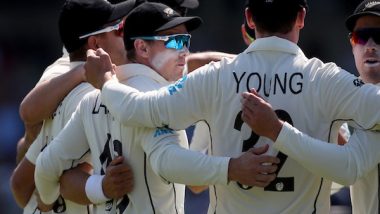 Birmingham, June 13: Neil Wagner and Matt Henry took three wickets each as England was bundled out for 122 in the second innings, and in the end, New Zealand won the second Test on Day Four comfortably by eight wickets here at Edgbaston, Birmingham on Sunday.

For New Zealand, Tom Latham and Ross Taylor remained unbeaten on 23 and 0 respectively as the side registered a comprehensive win over the hosts. In the second Test, New Zealand made six changes, but every player that came in gave a spirited performance.

With this win, New Zealand won the two-match series 1-0 and now the side would enter the finals of the World Test Championship (WTC) confidently. India and Kiwis will be locking horns in the WTC final at the Ageas Bowl, Southampton, beginning June 18. ENG vs NZ 2nd Test Day 4 Stat Highlights: New Zealand Hand England Their First Home Test Series Defeat Since 2014! (Watch Video).

Chasing just 38 runs to win the match and series, New Zealand did not get off to an ideal start as Devon Conway (3) was sent back to the pavilion by Stuart Broad in just the second over of the innings. Will Young (8) was also dismissed by Olly Stone, but in the end, Latham and Taylor guided Kiwis to an eight-wicket win.

Resuming Day Four at 122/9 and a lead of 37 runs, England's overnight batters Olly Stone and James Anderson were not able to do anything as on the very first ball of the day, Boult sent Stone (15) back to the pavilion.

With this wicket, New Zealand ensured that they just need to chase 38 runs to win the match and series. For the Kiwis, Neil Wagner and Matt Henry returned with three wickets each. On Saturday, Henry and Wagner picked three wickets each as New Zealand dismantled England's batting to sniff victory on Day.

Three of the second Test. England crumbled on day three but the hosts managed to take the game to the penultimate day as they took a slender lead of 37 runs before the end of the play. England ended the day at 122/9 with Olly Stone and James Anderson unbeaten at 15 and zero runs respectively.