In his letter to the chairman of FIFA's ethics committee, Bajaj wrote, "Instead of investigating the charges, AIFF has given clean chit to the GS without due process, which has forced me to write this letter so that this Hon'ble Committee impartially investigates the charges of sexual harassment and corruption against Mr. Kushal Das." 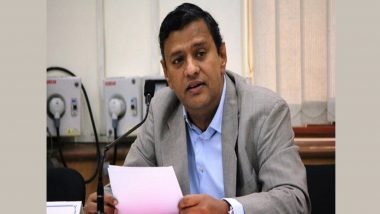 New Delhi, May 5: Entrepreneur Ranjit Bajaj has lodged a complaint with the National Commission of Women against All India Football Federation general secretary Kushal Das besides writing to FIFA and AFC's ethics committees, days after alleging that the top official had sexually harassed employees at workplace.

Requesting an independent review committee of world football governing body FIFA and Asian Football Confederation (AFC) to investigate the grave charges, Bajaj, on Thursday questioned why the AIFF has not yet contacted him and asked for evidence despite the grave charges against Das, whereas he "has already written" to the AIFF.

"The complaint has been registered by NCW and a case officer has also been applied to me who I have to contact after its preliminary inquiry is completed. The case officer is always for assistance at any time," Bajaj, who previously owned I-League club Minerva Punjab FC, told PTI. AIFF EC to Discuss on Ranjit Bajaj.

Soon after Bajaj went public with his allegations last month, the AIFF and its internal complaints committee head Jyotsna Gupta had outrightly rejected them. Das was then cleared of the charges by the sports body's integrity officer Javed Siraj, who termed the allegations "frivolous and devoid of truth" in his report.

Alleging that Gupta is also Das' private secretary, Bajaj asked how could she "investigate and also clear her boss within half an hour of my tweets". Bajaj was aghast in the "manner in which the investigations were carried out".

In his letter to the chairman of FIFA's ethics committee, Bajaj wrote, "Instead of investigating the charges, AIFF has given clean chit to the GS without due process, which has forced me to write this letter so that this Hon'ble Committee impartially investigates the charges of sexual harassment and corruption against Mr. Kushal Das."

"It is baffling that despite taking cognizance on the basis of my tweets, the integrity officer did not even call me to substantiate my allegations which is completely contrary to the principles of natural justice."

Directing his ire at Siraj, Bajaj wrote, "The bias nature of the preliminary investigation (if any) is clear from the fact that the integrity officer did not even deem it appropriate to open the investigative proceedings as opening the same would lead to a final report, the decision of which would then be on with Ethics committee."

Bajaj and the AIFF had been at loggerheads in the past with the national federation suspending him for one year in 2018 after finding him "guilty" of making racist remarks against a referee. In the letter, Bajaj further said "I pray for an independent review committee to investigate the grave charges".

In 2019, the AIFF had reprimanded Bajaj for his criticism of the federation on social media, terming it "derogatory in nature". In his letter to the sport's apex body, Bajaj also made a reference to that. Integrity Officer Gives AIFF General Secretary Das Clean Chit on Molestation Charges.

"In the facts and circumstance of the present case, I pray and request that the committee may direct initiation of investigation and grant me a chance to lead preliminary evidence regarding the allegations and give me a fair opportunity to substantiate my claims."

The AIFF's integrity officer had said he has come to the conclusion that Das is innocent after conducting an the inquiry which included questioning of the presiding officers of the federation's internal complaints committee over the years.