Get latest articles and stories on Sports at LatestLY. Ali returns to the Club where he started his professional cricketing journey as a 15-year-old 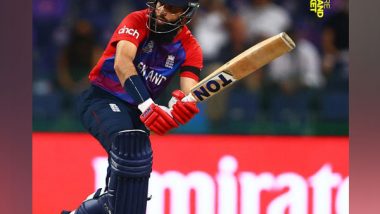 Born in Sparkhill, Birmingham, the 35-year-old is also available for red-ball cricket with a pay-as-you-play clause included in his deal.

Ali returns to the Club where he started his professional cricketing journey as a 15-year-old.

The left-handed batter and right-arm spinner developed through the Warwickshire Academy and Second XI ranks, striking a half-century on his first-class and County Championship debuts.

Since being at New Road, Ali has become an international star representing England around the world, whilst also being a regular at the Indian Premier League.

Ali returns to Edgbaston looking to add to those tallies, whilst also captaining Birmingham Phoenix in The Hundred.

Ali said: "I am delighted to return home to Edgbaston. I was born and raised just a few miles away from the stadium, with my life always centred around Birmingham."

"When the opportunity presented itself, it was a decision I could not say no to and I believe I have unfinished business at the Bears."

"I am incredibly excited to be back and to play in front of the best atmosphere in world cricket. It is a place that has so much history and players always have memories and stories of playing here. I am looking forward to contributing and being part of hopefully something special."

Director of Cricket Paul Farbrace said: "Mo is a huge signing for Warwickshire and a real statement of intent for our ambitions. Mo is someone I have known for many years and is a leader on and off the pitch. The experience he will bring to the club will be pivotal in our development as a team."

"He says himself that he has unfinished business at Warwickshire and I'm sure the members and supporters will be excited to see Mo back as a Bear." (ANI)