The Portugal star has stated his desire to leave Manchester United this summer according to some reports. He also has not joined the club's training and looks set to be missing out on their pre-season. 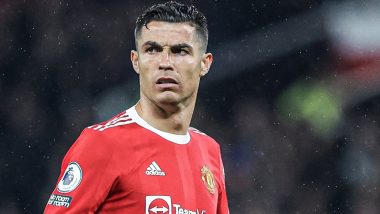 Is Cristiano Ronaldo really moving on from Manchester United? Well, this was definitely not a question that any Manchester United fan would have thought they'd encounter. When Ronaldo had rejoined the club in a sensational move from Juventus, Old Trafford surely hoped that they'd get to have the superstar with them at least for a couple of years. At least, his contract said so. But just after a year, fresh reports have emerged claiming Ronaldo is seeking a move away from Manchester United with him ready to leave if the right bid comes in.  Frenkie de Jong Transfer News: Barcelona Insist Dutch Midfielder Is Not for Sale

Ronaldo failing to join Manchester United's training session can be taken as an indication of him not being eager to stay at Old Trafford. Although he cited 'family reasons' for his absence, it can be one of the first signs of his move away from the club. Chelsea are among the suitors of the Portugal star with his agent Jorge Mendes having met new club owner Todd Boehly and discussed the player's transfer. Also, a move to Bayern Munich cannot be ruled out with the Bavarians locked in a difficult spot with wantaway striker Robert Lewandowski.

Fans of Ronaldo know that the player is full of ambition. He likes to compete at the highest level and fairly enough, gives his best for whichever team he plays. After rejoining Manchester United last summer, Ronaldo turned out to be their best player of the season. Unfortunately, that was not enough for the Red Devils to have a good season as they finished sixth in an underwhelming campaign of all sorts. Them missing out on Champions League football for the upcoming season cast a shadow of uncertainty over his future at the club. Should he decide to compete in the Champions League, a Manchester United exit is looming on the cards and it is highly possible that he leaves the club to compete in Europe's premier competition.

(The above story first appeared on LatestLY on Jul 06, 2022 09:21 PM IST. For more news and updates on politics, world, sports, entertainment and lifestyle, log on to our website latestly.com).