Ronaldo has reportedly made clear his desire to leave Manchester United this summer and seek a different challenge where he can compete in the Champions League next season. With Ronaldo's exit likely, here are five players Manchester United can target to replace the Portuguese star. 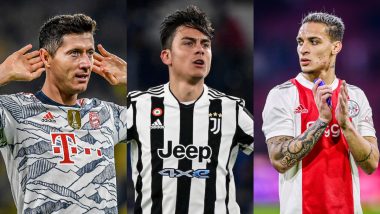 The Red Devils have had a quiet summer transfer window so far. After a host of big-name departures from the club, they were expected to be a busy player in the transfer window but that has not happened at all with only one signing made in the form of Tyrell Malacia, so far. They have been linked with Barcelona's Frenkie de Jong for a long time now but recent reports have stated the Catalans' unwillingness in letting the midfielder leave. Now if Ronaldo leaves, it would indeed be a big setback for Old Trafford. But they can potentially sign any one of these players as the five-time Ballon d'Or winner's replacement.

1) Paulo Dybala: The Argentine is one of the most exciting talents in European football at the moment. Dybala left Juventus at the end of last season and is a free agent at the moment. Manchester United should look at a player of his calibre and talent as Ronaldo's replacement. He can also be the one around whom the new team under Erik ten Hag is made. But Dybala has been linked to a move to Inter Milan and Manchester United need to act quickly to secure the Argentine's signature. Cristiano Ronaldo Transfer News: Portuguese Star's Agent Jorge Mendes Meets Barcelona President Joan Laporta Amid Manchester United Departure Rumours

2) Robert Lewandowski: Well, this one is surely audacious but is a good option. Lewandowski has no interest in continuing his career at Bayern Munich and has denied a contract offer from the Bavarians. With Barcelona, (Lewandowski's preferred destination) not being able to pay up the fee Bayern is seeking, Manchester United can use this opportunity to sign the world-class forward, who has a knack for consistency.

3) Antony: This is one player Manchester United have been linked with this summer. The winger is reportedly keen on reuniting with his former manager in Erik ten Hag with the Red Devils too eager on making this signing a reality. Antony would be like a fresh injection in Manchester United's attack in Ronaldo's absence and can team up pretty nicely with Anthony Martial in the middle.

4) Victor Osimhen: The Nigerian striker can become the new leader of ten Hag's Manchester United next season. Only 23 years old, Osimhen is a promising talent and the chance to compete in a platform as massive as the Premier League and play for a club like Manchester United should really be tempting.

5) Dominic Calvert-Lewin: The Everton striker can also be signed by Manchester United as a potential replacement for Ronaldo. Proven talent in the Premier League, Calvert-Lewin can become the face of Manchester United's attack if Ronaldo decides to leave. The Englishman has a knack for goals and is one of the most sought-after players in England.

(The above story first appeared on LatestLY on Jul 06, 2022 10:22 PM IST. For more news and updates on politics, world, sports, entertainment and lifestyle, log on to our website latestly.com).