The team will then face Barcelona on April 10, followed by the second leg of the quarterfinals at Liverpool on April 14. 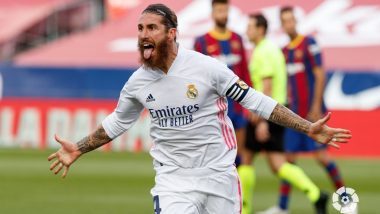 Madrid, April 1: Real Madrid defender Sergio Ramos injured his left leg while playing for Spain and said Thursday he will miss upcoming matches against Liverpool and Barcelona. Madrid said the 35-year-old Ramos has "a muscular injury to the inner part of his left lower leg."

The Spanish club did not give an estimate on how long Ramos would be sidelined, but the center back ruled himself out of the important matches.

"What hurts me the most is not being able to help my team in these highly-demanding games when our season will be on the line," Ramos wrote on Instagram. Sergio Ramos vs Mohamed Salah Clash Averted: Real Madrid Captain Injured While Playing For Spain, Will Not Play Against Barcelona & Liverpool.

Ramos said he "felt pain in my leg while I was cooling down on the field" after he played the final minutes of Spain's 3-1 victory over Kosovo in World Cup qualifying on Wednesday.

Ramos saw limited action for Spain over the international week. He did not play in Spain's 2-1 win over Georgia on Sunday, and was substituted at halftime in the 1-1 draw with Greece last week. Ramos only recently recovered from left knee surgery that sidelined him for several weeks.