The world was waiting for the UCL 2020-21 matches between Real Madrid, Liverpool. Reason? We all know about the infamous encounter between Sergio Ramos and Mohamed Salah where the Egyptian was injured during UCL 2018 finals. 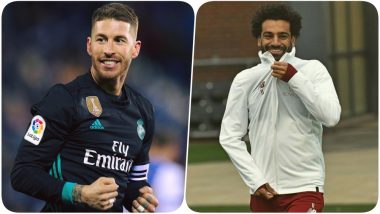 The world was waiting for the UCL 2020-21 matches between Real Madrid, Liverpool. Reason? We all know about the infamous encounter between Sergio Ramos and Mohamed Salah where the Egyptian was injured during UCL 2018 finals. Salah was ousted from the game and Real Madrid won the UCL 2017-18 finals. Once again the battle was supposed to take centre stage. But alas! the battle between the stalwarts is not happening. The Real Madrid captain has injured himself while playing for Spain and thus he will not be featuring in the matches against Liverpool and Barcelona. Sergio Ramos on Mohamed Salah Injury: He Grabbed Me First.

Ramos posted a long note post this after the injury. He explained that he cannot do anything much about the injury and can only cheer for his team. Ramos said he "felt pain in my leg while I was cooling down on the field" after he played the final minutes of Spain's 3-1 victory over Kosovo in the World Cup qualifying on Wednesday. "I can't do anything but speak frankly, work hard and cheer on the team with my soul," read a part of the note.

Now, let's have a look at the post shared by Ramos on social media:

Real Madrid also shared Sergio Ramos' report on social media. The fans are surely dejected with this piece of news. Recently Ramos had suffered from an injury in his left knee due to which he had missed out on a few games.

(The above story first appeared on LatestLY on Apr 01, 2021 09:45 PM IST. For more news and updates on politics, world, sports, entertainment and lifestyle, log on to our website latestly.com).