Director Jennifer Kaytin Robinson is returning to Netflix for her next directorial effort, a source confirmed. 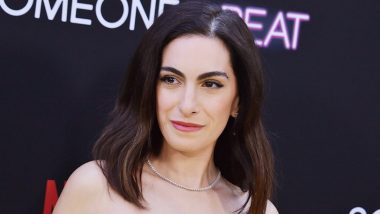 Director Jennifer Kaytin Robinson is returning to Netflix for her next directorial effort, a source confirmed. According to Variety, following the breakout success of her first feature, the anthemic breakup tale 'Someone Great,' Robinson returns with a new project she will direct, produce, and has co-written, titled 'Strangers.' The dark comedy is inspired by Alfred Hitchcock's 'Strangers on a Train,' and it will follow unlikely cohorts Drew (an alpha, 'It' girl) and Eleanor (beta, alt girl) who agree to go after one another's bullies. Don’t Look Up: Meryl Streep, Leonardo DiCaprio, Timothee Chalamet and More Celebs To Be a Part of Netflix Comedy!

Co-written with her 'Sweet/Vicious' collaborator Celeste Ballard, the story features 'the scariest protagonists of all: teenage girls,' according to the logline. Anthony Bregman and Peter Cron of Production company 'Likely Story' will produce alongside Robinson, who has been on a hot streak of late. She's set up a TV adaptation of the teen dance classic 'Center Stage' at Sony Pictures Television. Moreover, Robinson has also been recruited to co-write the screenplay for 'Thor: Love and Thunder.'- the Marvel sequel which will reunite Chris Hemsworth, Natalie Portman, Tessa Thompson, and director Taika Waititi. Selena: The Series – Netflix Sets Premiere Date of Biographical Drama on Music Legend Selena Quintanilla

Variety reported that Robinson is also the creator and executive producer of MTV's critically acclaimed and fan-beloved, 'Sweet/Vicious.' The series gave close examination to sexual assault crimes on college campuses, and became a cornerstone for survivors' portrayal on television.