'Kill the Bill' Protests: 26 Protesters Arrested After Clash With Police in Central London

At least 26 people were arrested in Central London on Saturday (local time) after a protest against a bill that would give UK law enforcement more powers to restrict demonstrations turned violent, leaving 10 officers injured, the police have confirmed. 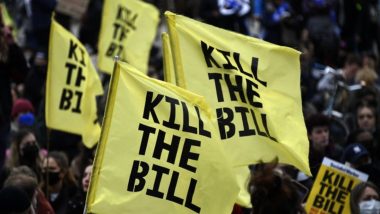 London, April 4: At least 26 people were arrested in Central London on Saturday (local time) after a protest against a bill that would give UK law enforcement more powers to restrict demonstrations turned violent, leaving 10 officers injured, the police have confirmed.

"At this stage, 26 people have been arrested for a variety of offences including assault on police and breach of the peace," the Metropolitan Police said in a statement, adding that the policing operation is still ongoing and that the number of arrests is likely to rise, as reported by Sputnik.

Clashes erupted when the officers were trying to disperse a small number of demonstrators who refused to disperse after the majority of the people that took part in Saturday's protest in front of Parliament Square had left.

"The vast majority of people who turned out in central London on Saturday (local time) did so while adhering to social distancing. They engaged with my officers when required and left when asked ... However, a small minority did not engage despite the repeated efforts of officers on the ground. This left us with no option but to move to an enforcement stage and arrests have been made," Commander Ade Adelekan said to Sputnik.

The Black Protest Legal Support group said on Twitter that two of their legal observers attending the demonstration were arrested and taken to custody.

The so-called Kill the Bill protests were staged on Saturday in London, Newcastle, Birmingham, Liverpool and Bristol, following the easing of the COVID-19 lockdown restrictions early this week, although demonstrators are urged to keep social distancing.

The Police, Crime, Sentencing and Courts Bill envisions increasing police powers to crack down on protests, tackle unauthorized encampments such as the ones set up by climate activists in the past and prevent the release of sexual and violent criminals once they have served half of their sentences. It will also seek to modernize courts and tribunals by updating existing court processes to provide better services for all court users and underpin open justice, Sputnik reported.

The legislation was about to be voted on in the House of Commons after the murder of a young woman in London. Sarah Everard disappeared on the evening of March 3 while walking home after visiting some friends in Clapham, south of London. Her body was found hidden in a builder's bag in a woodland area in Ashford. Metropolitan Police officer Wayne Couzens was charged with kidnapping the woman and killing her.

The first Kill the Bill rally in Bristol took place on March 21 with some 3,000 demonstrators. The demonstration turned into violent clashes, with protesters throwing bottles and rocks at officers. They also set police vehicles on fire and smashed the windows of a police station. Twenty-one officers were injured during the riot, with two of them remaining in serious condition, and 25 people have been arrested on suspicion of violent disorder.