Get latest articles and stories on World at LatestLY. Three terrorists were killed as the Pakistani military conducted a clearance operation in the country's northwestern Khyber Pakhtunkhwa province, the military said on Saturday. 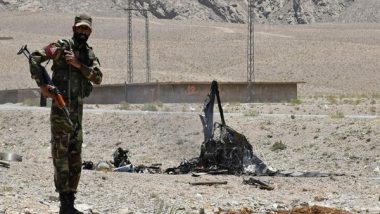 The security forces conducted the intelligence-based operation on the reported presence of terrorists in the North Waziristan district of the province, the army's media wing Inter-Services Public Relations (ISPR) said in a statement.

During an exchange of fire, a total of three terrorists got killed. Weapons and ammunition were seized from the killed terrorists.

Earlier on Friday, the security forces killed two terrorists during an exchange of fire in the general area Kulachi, Dera Ismail Khan.

The ISPR said weapons and ammunition were recovered from the terrorists during the encounter. On June 1, a Pakistani soldier was killed when terrorists targeted security forces in the North Waziristan district of the country's northwest Khyber Pakhtunkhwa province, the military's media wing said in a statement

During an intense exchange of fire, a young soldier who was 28 years old lost his life. Actions had been carried out to eliminate any terrorists found in the area. Hamid Ali, 28 was a resident of Sargodha city in Pakistan's Punjab province.

In a similar incident, on May 23, two Pakistani soldiers died in an attack carried out by terrorists at a check post in North Waziristan, local media reported. "On May 23, terrorists carried out a fire raid on a military post in general area Mir Ali, North Waziristan District. Troops initiated a prompt response," said the ISPR statement. During an exchange of fire, Sepoy Zahoor Khan (20) and Sepoy Rahim Gul (23) died.

On April 15, seven Pakistan Army soldiers died after terrorists ambushed a military convoy near the Afghanistan border in North Waziristan.

Recently, terrorist activities have increased in Pakistan border areas, especially in the North Waziristan district, according to the country's vernacular media. (ANI)