Chinese Foreign Ministry spokesman Zhao Lijian said this is not the first time that the NASA administrator has lashed out at China in disregard of facts. 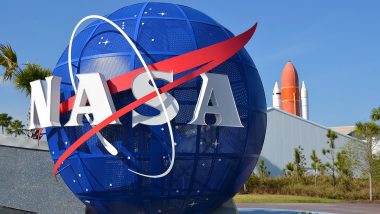 Beijing, July 5: Accusing the US of "stoking space arms race and disrupting global strategic stability", China has slammed NASA chief Bill Nelson for his jibe that Beijing, which is aggressively pursuing a space programme under the aegis of its military, might one day take over the moon and claim ownership of it. Chinese Foreign Ministry spokesman Zhao Lijian said this is not the first time that the NASA administrator has lashed out at China in disregard of facts.

“Some US officials have spoken irresponsibly to misrepresent the normal and legitimate space endeavours of China. China firmly rejects such remarks,” he said on Monday and accused Washington of “stoking space arms race and disrupting global strategic stability and its enormous threat to the peaceful use of outer space”. NASA To Launch Three Research Rockets From Private Australian Space Port.

In an interview to German newspaper Bild on the weekend, Nelson said: “We must be very concerned about China landing on the moon and saying that it now belongs to the People's Republic and everyone else should stay out.” He also claimed that Chinese astronauts were learning how to destroy other countries' satellites.

Nelson said the competition between China and the US in space was intense, especially for the lunar southern pole where there could be water, the Hong Kong-based South China Morning Post reported. Condemning the NASA chief's remarks, Zhao said the US openly defined space as a war-fighting domain. Chinese Envoy Expresses Concern over US Tariffs with Yellen.

“It has been accelerating efforts to build a space force and space command, developing and deploying offensive space weapons, hindering the negotiation process for a legal instrument on arms control in outer space, and enhancing military cooperation with its allies in outer space,” Zhao said. China, which has carried out expeditions to the moon including a lander, has announced an ambitious lunar exploration plan to send astronauts to the moon around 2030 and build a station there in five or so years.

Besides moon expeditions, China has made advances in its space programme. A second batch of three Chinese astronauts on a six-month mission are building a space station which is expected to be completed later this year. The significant feature of China's under-construction space station is its two robotic arms, especially the long one over which the US has expressed concern over its ability to grab objects including satellites from space.

The 10-metre-long arm was previously seen in action successfully grabbing and moving a 20 tonne Tianzhou-2 cargo ship in a test, according to China Manned Space Engineering Office (CMSEO). In February, China unveiled an ambitious plan for its burgeoning space industry which included over 50 space launches and six manned space flights to complete the building of its space station. According to China Aerospace Science and Technology Corporation (CASC), the country will carry out more than 50 space launches in 2022, sending over 140 spacecraft under its ambitious plans.