India and the United Kingdom concluded the fifth round of talks for an India-UK Free Trade Agreement (FTA) last month, the Ministry of Commerce and Industry said on Thursday. 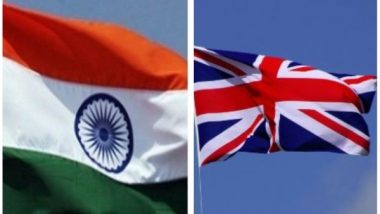 New Delhi, August 11: India and the United Kingdom concluded the fifth round of talks for an India-UK Free Trade Agreement (FTA) last month, the Ministry of Commerce and Industry said on Thursday.

The ministry said that negotiation officials undertook these technical talks in a hybrid fashion - with some of the teams meeting in New Delhi, India, and the majority of officials joining virtually. India and UK Conclude Second Round of Talks For India-UK Free Trade Agreement.

"On 29 July 2022, the Republic of India and the United Kingdom concluded the fifth round of talks for an India-UK Free Trade Agreement (FTA)," the Commerce Ministry said in a press release.

For this round of negotiations, technical experts from both sides came together for detailed draft treaty text discussions in 85 separate sessions covering 15 policy areas, the release said.

Indian and UK officials will continue to work intensively throughout the summer towards our target to conclude the majority of talks on a comprehensive and balanced Free Trade Agreement by the end of October 2022.

India and UK launched Free Trade Agreement negotiations in January this year. The two countries are exploring the possibility of an interim agreement to provide quick gains for benefitting businesses on both sides.

Last month, Commerce Secretary BVR Subrahmanyam said the Free Trade Agreement (FTA) talk between India and the United Kingdom is on track and the negotiations are likely to be completed by end of August.

Speaking to the media after signing two MoUs and a framework agreement with the UK, Subrahmanyam said that the India-UK FTA negotiations would be concluded by August 31 and after internal approvals on both sides, the agreement would be ready to be signed as per the convenience of leaders of the two countries.

On the impact of the change in government in the UK on the proposed FTA, Subrahmanyam said, "Irrespective of the party in power in the UK, the logic of FTA with India is irreversible."